Hey people, the summer is coming to an end (I have to go back to school tomorrow!), and we all know what that means…

As usual, E! started their coverage at 6, and it was, as usual, a whole lotta nuthin’.

Ryan Seacrest and that bobble head, Giuliana Rancic just blathered on and on about what people are wearing, and who will be the next judge on American Idol (I think Seacrest plugged that shit 45 times).

NBC started their coverage an hour before the show at 7, and I just tuned into them 5 minutes before.

Billy Bush is an idiot.

I’d like to see a cage match between Billy and Ryan. 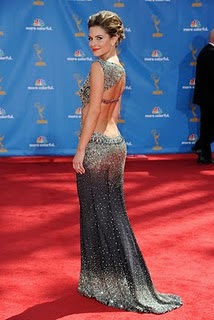 Hey Maria, “Showgirls” called. They want their wardrobe back.

And here’s an example of what seems to be the “jewelry trend” – rings that cover your fist. 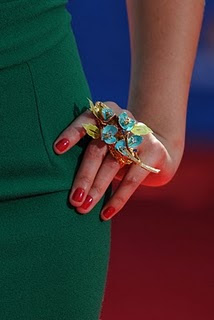 Here is the electrified corpse of Robert Morse! He’s on Mad Men. 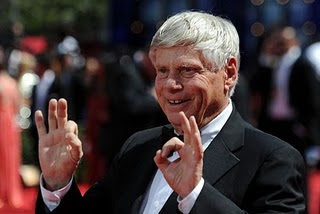 I’m guessing he’s very happy to be alive, let alone at this show. 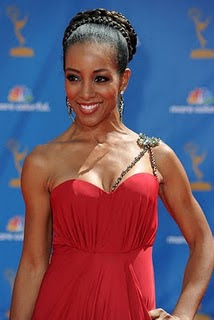 I think she’s still a talking head on Access Hollywood. Funny, you NEVER hear ANYTHING about this chick. 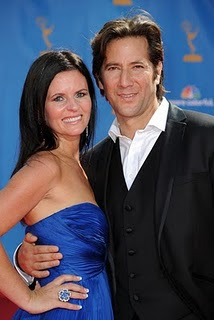 Who are they and why are they here? (He’s Desmond on Lost, brother- Stefan)

Our host Jimmy Fallon made a GREAT opening package that aped Glee. I don’t know if you watch his show, but he’s been doing this for a while now.

This was GREAT! (Neil Patrick Harris, watch your back!)

On to the first category and award

Do you hear the music leading up to the commercial?

It’s a James Brown song! Do you know why?

Well I think that The Roots are the house band (with some extras) and/or Ahmir is the Musical Director. This band is very funky. 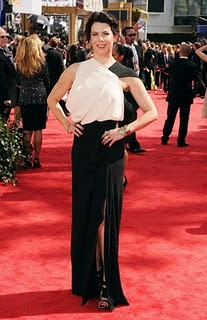 Her dress looks sort of like a black and white plastic bag.

HOORAY FOR THE NERD!

WINNER – EDIE FALCO – Nurse Jackie (when she accepted the award, she pointed out that her show IS NOT A COMEDY)

I love The Amazing Race, but HOORAY FOR THE FOODIES

Holy crap, these Oprah commercials are getting ridiculous. Now I’m crying at every single one of them. Farewell indeed!

I gotta give Mr. Braugher a shout out for being nominated. He’s Black, AND on a show that me and about 6 other people watch.

I wasn’t a big fan of “Everybody Loves Raymond,” but what’s his face did a great job creating this show. The guy who play –Ray Romano, THAT’S his name! Anyway, if it’s still on the air, you should watch it. No, I don’t remember what network its on. (TNT-Stefan)

Sorry Christina, looks like your red headed T&A couldn’t do it for ‘ya.

If you haven’t watched that show, you need to catch up.

WINNER – STEVE SHILL – Director for “The Getaway” episode of Dexter

Oh lord, here’s Fallon dressed up like Elton John, singing a tribute to the shows that were cancelled. He changed the lyrics to “Candle In The Wind.” Now, he’s a member if Boys II Men bidding farewell to Law And Order (“Goodbye To Yesterday”) – now he’s Billy Joe Armstrong singing goodbye to Lost (“The Time Of Your Life”) Pretty good Jimmy!

Now I’m really paying attention to the songs for the commercial bumpers – they are really funky. Playing “Fame” by David Bowie – That sampled JAMES BROWN!

Wait a minute, is that “Rocks Off” I hear? Wow. Oh, and another promo for the very funny NBC show “Community” (brought to you by some luxury car maker)

He’s handing out beers to the front rows.

And he cracked a good Mel Gibson joke. (Ricky didn’t want to do any jokes about him because he suffered enough. But not as much as the Jews)

I CAN’T WAIT for The Golden Globes!

DIRECTING FOR A VARIETY, MUSIC, OR COMEDY SPECIAL
The 25th Anniversary Rock And Roll Hall Of Fame Concert
In Performance At The White House: A Celeb…Wait a minute, you don’t care about that.

Wait a minute. A commercial is about to come on. What’s that I hear? “Knee Deep” by P-Funk!

The Bob Hope Humanitarian Award is going to gorgeous George Clooney. And he’s asking the crowd to NOT give him a standing ovation. He’s so humble.

He’s come a long way from The Facts Of Life… 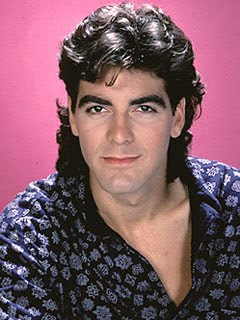 I didn’t see any of them, so I’m skipping them.

Here’s Jewel. “I wrote this song for a friend who died of Cancer.”

What a nice lead in to the montage of TV people who died.

I would have rather heard this…

He played “Dr. Death” in the TV movie, “You Don’t Know Jack.” This is ironic, because he looks like an electrified corpse who just got shocked back to life. What is going on with the hair on his head…and his face? Oy.

That’s three in a row! I think True Blood should have won.

Take THAT The Office! Sorry, Glee.

Geez, that show cleaned up tonight! It is quite funny.

It was a little boring, no wardrobe malfunctions (one came close), and nobody fell or tripped, but I think that Fallon did a good job and that it was very funny.

Oh, did I mention, I got a job at a better school!