I appreciate geek-inspired kitsch just as much as the next freak, but when I saw these shoes I had an overwhelming desire to beat up anyone wearing them.

Now, these are still in the prototype stage which means that hopefully someone in the marketing department will take an objective look at them and say, “BURN THEM! BURN THEM WITH FIRE!” and the whole idea will be dropped immediately and the person behind their creation will be gutted all Braveheart-style.

Look, I understand that Batman is cool, but let’s face it, Robin is not. Batman himself, runs through the Boy Wonders like Mexican food through a colon because they are so unpalatable. Hell, fans even voted to kill Robin #2, Jason Todd, just because they hated him so much (regardless of the fact that he’s back now like some Jason-like offspring. Red Hood…whatever).

And can you tell me what happened to Chris O’ Donnell’s career since donning the nipple enhancing Boy suit? Once the audience associated him with Robin it was, “Good-bye” acting, “Hello” janitorial night crew. 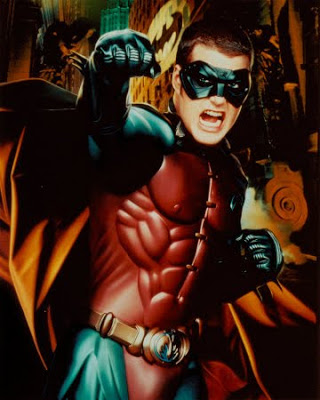 Seriously, would you hump This?

So, basically, what I am getting at with this all this raving is that if you are going to make Batman and Robin shoes circa 1960’s, then do so in a way that makes them retro cool. Not “Hey! look at me, I’m a thirty year old man wearing toddler shoes!”