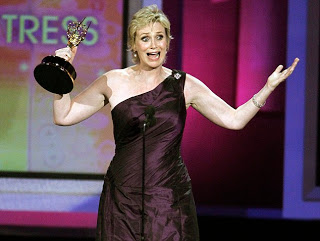 After all was said and done at the Emmys, some trends shook out: AMC and HBO top the list of hardware; Mad Men still rules drama; Lost got token acknowledgment; Conan O’Brien kept his mouth shut since The Daily Show beat his short-lived Tonight Show; and Betty White kept the whole room transfixed.

But this was also the year of the freshman, at least in comedy. ABC’s Modern Family took home three awards, including best comedy. And Fox’s Glee took home trophies for supporting actress Jane Lynch and director Ryan Murphy.

Modern Family and Glee pretty much took over the Emmys, as the funniest bits involved both. Thanks to Glee, the Emmys had its most triumphant opener in quite some time. Any time you can get Jon Hamm to do fist-pumping choreography and return Kate Gosselin to her Dancing with the Stars glorious awfulness, you know you’ve got a winner. Check the video below the jump.

And Modern Family‘s Emmys spoof showed that even Stewie Griffin would fit in; Sofia Vergara in 3D would be both amazing and scary; and everyone loves George Clooney. 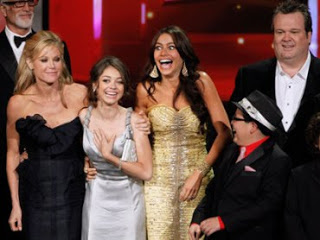 Speaking of Vergara, no word yet on whether she’ll fulfill that promise to run naked down Sunset Boulevard because the show won for best comedy. “Listen, I’m not afraid of anything,” she said last night after the Emmys broadcast wrapped. “I’m Colombian.”

Let’s just hope her TV husband doesn’t sub in for her. “The good thing is that Ed O’Neill said that he will back me up in case something happens and I cannot do it,” she explained. “He’s gonna do it too.”