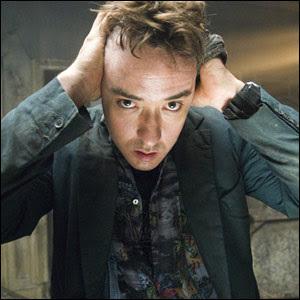 Yesterday, via his Twitter feed, John Cusack broke the news that he will be playing Edgar Allan Poe in director James McTiegue’s (V for Vendetta) period detective thriller The Raven.

“officiali- will play edgar allen poe in fall-a-film called the raven, send any poe- gold – my way as i begin this journey into the abyss” the actor tweeted, before posting this creepy video of Poe “reciting” his magnum opus in Basil Rathbone’s voice:

Horror site Bloody Disgusting describes the film as a “thriller set in the last days of Edgar Allan Poe’s life, when he gets wrapped up in a serial killer investigation.”

Arrow in the Head elaborates with this quote from McTiegue: “It’s sort of Se7en meets a series of Poe stories. It’s set in 1850s Baltimore, and it’s about creating Poe’s version of 1850s Baltimore, him moving through it. So it has a lot of the Poe stories interwoven into it.”

Both Jeremy Renner and Ewan MacGregor had been previously attached to the long gestating project, which was written by Ben Livingston and former Bionic Woman and Ghost Whisperer story editor Hannah Shakespeare.

Start and release dates have yet to be announced, and the IMDb currently lists the film as being in “pre-production.”