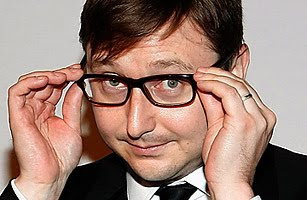 For the second straight year, John Hodgman worked the Emmys as announcer during those long walks to the award podium.
And in true Hodgman fashion, those comments were an irreverent mixture of true fact and silly invention. Well, for the most part: word is that he had to lay off Al Pacino, and announcer Melissa Disney was brought in for more reverential fare.
Check out the announcements in full after the jump. (Hat-tip to New York Magazine.)

“Eric Stonestreet hails from Kansas, and reports that while growing up, he wanted to be a disc jockey, a Marine, a prison administrator and a clown. Apparently that is all one job in Kansas.”

“[Modern Family co-creators] Steven Levitan and Christopher Lloyd became writing and producing partners in 2006. They met at the top of the Empire State Building, and have gone back there every year to create a new Kelsey Grammer sitcom.”

“Ryan Murphy was previously nominated for directing the pilot of Nip/Tuck. Until then, no one in Hollywood had even heard of plastic surgery.”

“As Jim Parson walks to the stage now, nerds across America are taking to the streets in joy, setting cars on fire, and then backing away, using their inhalers.”

“[Edie Falco is] of Swedish and Italian descent, which means both her parents were constantly cooking meatballs.”

“Aaron Paul says his first memory of television was loving Fraggle Rock. For those of you who don’t know, you’ll presume ‘fraggle rock’ was an extremely powerful type of crystal meth.”

“Archie Panjabi…made her film debut in the British comedy East is East, which had a shocking twist ending in which it turned out that east is actually west.”

“[Dexter director Steve Shill’s] first TV memory is watching Doctor Who. Quite frankly, Doctor Who is my only TV memory.”

“On her father’s side, Golden Globe winner Kyra Sedgwick is descended from William Ellery, a signer of the Declaration of Independence. I believe that means that every July fourth, Ms. Sedgwick gets a residual check.”

“[Winter Olympics director] Bucky Gunts majored in hotel management at Cornell, but changed to television after his thesis on ice-making machines was deemed wildly speculative, and probably dangerous. That name again is Bucky Gunts.”

“I’m not sure that the Academy would be so quick to reward The Daily Show if they knew what we used these Emmys for around the office. Executive Producer Rory Albanese will accept for the program because Jon Stewart is too busy resting in his bed of melted Emmys.”

“Before achieving success as an actor, David Strathairn attended the Ringling Bros. clown college. He majored in balloon twisting, and minored in starring in acclaimed independent movies.”

“[Temple Grandin director] Mick Jackson’s feature film credits include The Bodyguard, L.A. Story and Volcano. Interestingly, none of these movies was about a renowned animal doctor who was also autistic. Because there are some stories that can only be told on television.”

He concludes with a bland intro to Al Pacino: “This is Al Pacino’s second Emmy win. He previously won an Emmy in 2003 for his portrayal of Roy Cohn in HBO’s Angels in America.” He later said on Twitter: “I had a note from on high to play it straight with Pacino. I wish you could have heard my Barry Levinson material,” and then, “Were you aware of it?: Barry Levinson, David Simon, and John Waters meet in a Baltimore diner every Sunday and eat scrapple together.”