Here at The Mystery Box HQ, I have been delightedly anticipating one of my favorite times of the year –

While I realize that it is still more than a month away, like some cheap imitation salt water taffy, I am already feeling its sinister, goofy pull.

Sitting here in the doldrums of one of the bad months, September (a month that for myself only extinguishes the blissful warmth of beloved summertime and mostly arouses bad feelings and negativity) I felt that this year I would instead celebrate Halloween for an extended period of time. 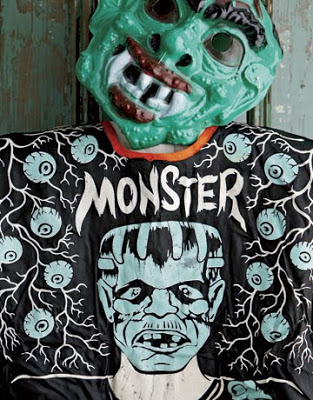 As a lifelong fan of the colorful kitsch and garish (is orange as psychedelic cool any other time of the year?) nonsensical revelry that revolves around Halloween, I want a prequel. 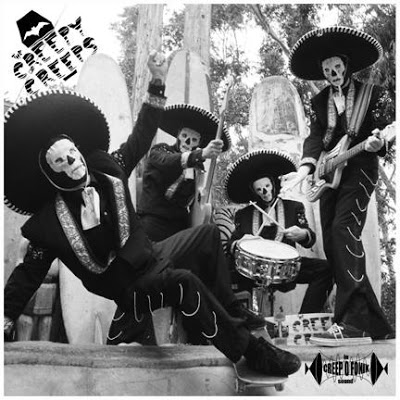 Emerging from out of the warm California sun of San Diego, The Creepy Creeps are of course, naturals for continuing the glorious lineage of surf music that originated in Orange County and other parts of Southern California in the early ’60s.

The band, rumored to be a supergroup made up of other infamous musicians from San Diego bands, originally self released several slabs of vinyl including their first self-titled LP The Creepy Creeps, a 10″ entitled Last To Leave, and a split 7″ 45. 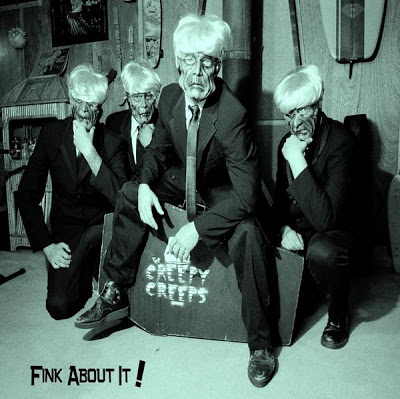 The Creepy Creeps debut album, Fink About It! has crept out on Dionysus/Creep-O-Fink Sounds.

The Creepy Creeps are another in a long line of my fave bands that perform in masks and costumes. What is there not to love about masked rock and roll? At various times the band appears as Frankenstein Monsters, spacemen, cavemen and fantastically, Dia de los Muertos mariachis! 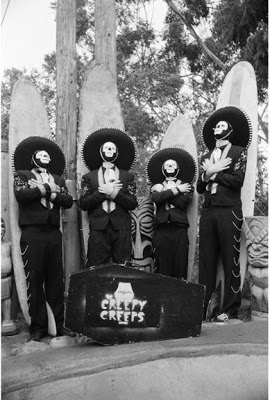 The members monikers are enough to make me a lifelong fan: Dr. Creepenstein on keys and guitar, Creepture on yellow guitar, Dia de los Creep on bass and Creepula on drums. Live shows often see the band augmented with their go-go dancers, Creep O Hauntus and She Creep. 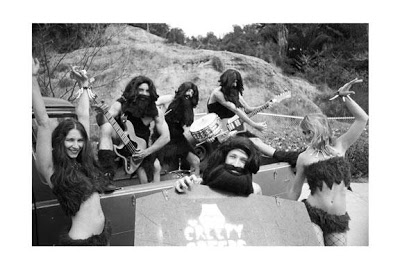 On Fink About It! occasional ghoul vocals spark up tracks such as my fave “7 Mau Mao’s” which somehow manages to incorporate and subvert The Rivington’s 1962 novelty hit “Papa-Oom-Mow-Mow” creating a new garage standard, while somehow managing two variations on the word “Mow.” Sheer genius, as is their song title “Shanghai Supplies.” 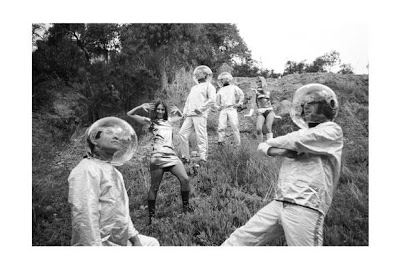 The songs live up to their titles with careening glee: “Chicken Creep Nasty,” “Fink About It,” “Sea Creep,” and “The Gooch” as well as a down right goofy public service announcement, all hearken back to a time of William Castle films and all night drive-in “Spook shows.” 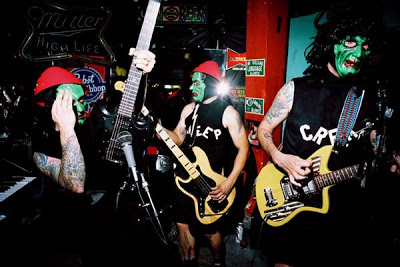 What makes Fink About It! such a remarkable album is the way in which the band has arrived at a sound that not only incorporates a classic surf instrumental sound, along with a pure adrenalin garage rock trashy pummel still manages to tweak those genres so they sound original, and especially, consistently incorporates an over the top keyboard sound that for myself is directly reminiscent of the great British band The Stranglers.

While The Stranglers may have been among the original class of ’76 first generation English punk bands, they were always an anomaly. Starting as thuggish pub rockers, they seized upon the opportunity and press that the fledgling punk scene offered (not too mention enjoying the aggression and sneering attitude) and rode the punk train to a fame and fortune that most bands of their class did not. Yet, because they really never stayed in one place musically and because of the prominence of Dave Greefield’s keyboard flourishes and at times prog rock meanderings, The Stranglers actually connected more to a band like The Doors, instead of say, the Sex Pistols guitar based punk. 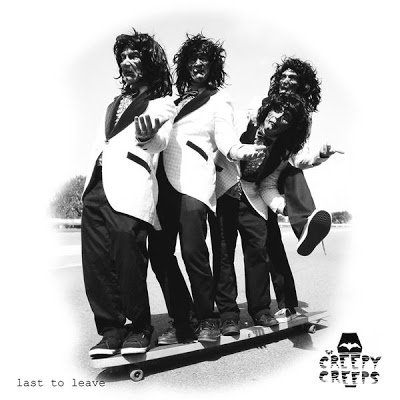 So am I telling you that The Creepy Creeps sound like The Doors? Not exactly but I am saying that I always heard a magnificent cross breeding of garage rock, art rock, proto punk and goth that has run through The Doors, The Stranglers, and now thankfully The Creepy Creeps. Of course you can add in a serving of ? & The Mysterians and all the other great garage punk legends that love featuring one of these distinctive (and representative of a Sixties sound) keyboards, be it a Vox Continental (Ray Manzarek of The Doors), a Farfisa (Rod Argent of The Zombies), or a Hohner Planet (Dave Greenfield’s sound). 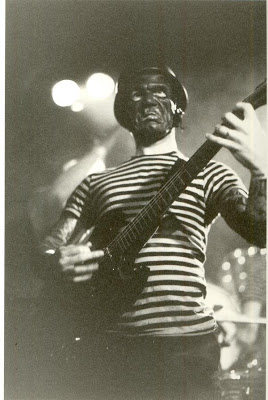 The Creepy Creeps are making Groovy Ghoul music that is both then and now and will doubtlessly be as timeless as all things Addams Family and The Munsters.

Fink About It! is available on vinyl or cd from the fiendish folks at Dionysus Records or you can visit The Creepy Creeps information vault here.

Long may The Creepy Creeps music be masked, their vibes be a-haunting and their crypts be kicking!

“Haunted Hop” – The Creepy Creeps from Scott Jones on Vimeo. 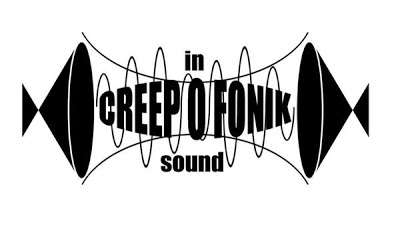 In this article:Music Review, Pop Culture, Written by Robert Jaz