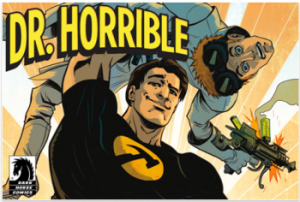 Let us be honest with ourselves. When it comes from outside media, most comic book tie-ins are disposable and poor in overall quality. From the 90’s “Married with Children” comic series to that collection of Bryan Singer-approved “Superman Returns” prequels — nine times out of ten, if it was a cross-promotional funny book last year, it’ll be recycled for Free Comic Book Day next year. Well, leave it to a Whedon to use an attempt at merchandising as an excuse to spin an enjoyable anecdote.
For those of you unversed in Whedon family values (seriously, you probably should just G.T.F.O.), the “Dr. Horrible and Other Horrible Stories” TPB is based on 2009’s “Dr. Horrible’s Sing-Along Blog” web series. Constructed by brothers Joss (whom you may have heard of), Jed and Zack Whedon, the musical webisodes focused on a would-be supervillian (Dr. Horrible, played by Neil Patrick Harris) who is torn between his need to be accepted by a cabal of bad guys and his love for the girl next door who wouldn’t hurt a fly (Felicia Day).
Collecting three online short stories and a one shot, the book (written by Zack Whedon) does a better job of world building than its source material, mostly by telling the origins of its heroes and villains through flippancy. 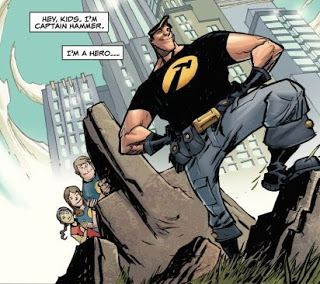 First up is Captain Hammer (drawn to exaggerate Nathan Fillion’s assurance by Eric Canete), the bonafide world-beater who is more bully than superhero. His assumptions on where super villains come from are a direct jab at the books target audience and it practically advises the reader to choose the side of evil in this battle of “good vs. evil.”
The third story features an embarrassing first date for Penny, the love interest of Dr. Horrible. Zack Whedon and artist Jim Rugg manage to capture the mousy-ness of actress Felicia Day. The kind of fluctuating confidence that we didn’t get to see much of in the Horrible shorts, but we’ve come to love on her own Internet series “The Guild.”
The other stories in the TPB focus on the villains (the reason we picked up this book in the first place). While the origin of Dr. Horrible cleverly rounds out the plot of the collection, I found myself most entertained by the Evil League of Evil’s short story. Surprisingly enough, it’s their Joker-esque plot to contaminate the city’s water supply that practically begs for a spin-off of its own.
Overall, the whole cast of characters are here, transformed from their real life, streaming video counterparts and onto ink and paper. While some artist, at times, try too hard to draw the characters like the actors (resulting in that other pitfall of the comic book tie-in: stiff-looking facial expressions), the Whedon family charm remains intact.
If only all cross media marketing was as good as Horrible. 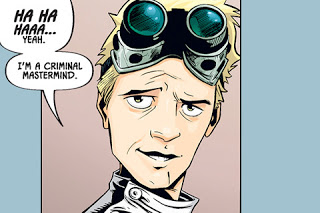 In this article:CAGMRC?, Comic Books/Strips, Reviews, Written by Troy-Jeffrey Allen