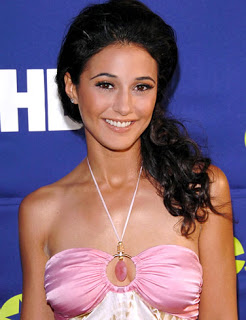 Showtime’s upcoming series The Borgias just added some extra heat. Entourage star Emmanuelle Chriqui will guest in 3 episodes.
Chriqui will play Sancia, a seductive (of course) Neapolitan princess who marries the youngest Borgia son Joffre (Aidan Alexander) even though she has designs for another one.
The Borgias features Jeremy Irons, Derek Jacobi and Holliday Granger as it chronicles the infamous family that ruled Renaissance Italy. It’s currently shooting in Budapest and is set for a spring 2011 release.
It’ll be interesting to see where Chriqui ends up on the show. If The Borgias follows in the same stride as Showtime’s other steamy history piece The Tudors, then that Entourage threesome scene could be put to shame. Check out the trailer below.