I know a lot of folks say that but where I am different is that unlike most it’s not the innocence, the simplicity of life, or the feeling of youth that I miss.

Sure, that stuff was great, but what I really miss the most was spending my lunch or free periods playing AD&D or Marvel Superheroes role playing games with my friends.

I think its because as I have gotten older it seems to me like the art of imagination is kind of dying.

Back when I was in high school RPG’s were huge. 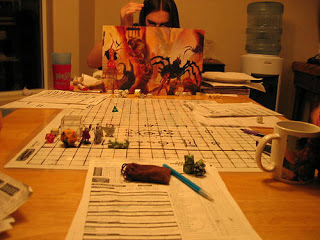 We attracted quite a number of kids to join our campaigns and I remember constantly meeting other players outside of school. Today I know of no one who even knows what a tabletop role playing game is.

Yet, I can’t throw a rock in a crowd without hitting 3 or more online gamers.

I don’t have anything against online gaming, but to me it never held a candle to the magic a table top campaign had. When a lot of folks I knew were into Final Fantasy or Ultima online was the trendy online role playing game, I was reading the latest World of Darkness campaign book.

Online gaming just never had any appeal to me.

What ever happened to the power of imagination? 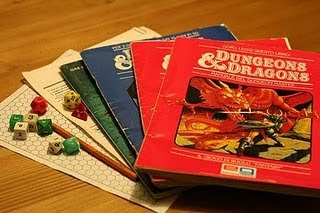 Everyone want’s better graphics, expanded detailed virtual settings, a mountain of different weapons and items but it just seems like a cheat to me.

The world you create with your mind in a table top RPG just cant hold a candle to the best MMORPG (multi-player massive online role playing game). Also, I never had the patience to sit in front of a computer for hours gathering experience points with often monotonous adventures in order to build your character to actually survive real campaigns. In table top games our DM’s would adjust the game to our experience level, so you never felt a need to focus on the points but rather the enjoyment of the game.

Other than AD&D and Marvel we tried our hand at Shadow Run, Champions, Star Wars, and even a game of Men In Black. It was fun to explore new ways to play and we spent hours debating the merit and flaws of each system. I even tried my hand at creating my own RPG which turned out okay but it was only played once before our teenage minds moved on to the classics or newer games.

Gaming was simpler then.

Remember, this was pre-internet, so meeting other gaming fans was a big deal and finding new games was like discovering new elements. There were no gaming stores, so we would drive hours away to the most remote bookstores to raid their small gaming shelf, hoping to find a new campaign setting or RPG. Once again I hate to sound like an old fogie, but these things are just taken for granted now a days. There’s always a new online game being peddled and new forums pop up all the time dedicated to the them.

Don’t even get me started on Magic and other card games.

We tried to game together during our freshmen year but we started to drift apart. Most of my friends just moved on to other things like their studies, video games or sex. I actually tried to keep up the gaming by starting my own weekly White Wolf game which turned into something bigger than I could handle. The games started out every two weeks but it soon spiraled out of control as I felt the pressure and was forced to hold it every week. Next thing I knew the word of mouth had spread and it was like blood in the water.

When I started getting phone calls at 2am from gamers I didn’t even know I had enough and quit. The magic was gone, so I moved on and didn’t really think about it till years later when I found an old box with my gaming books at my parents house. All the memories came back and I have to admit I found myself missing the days of my best friends and I spending a sleep over taking turns DM’ing campaigns.

It’s a shame that table top role playing games have declined in popularity. 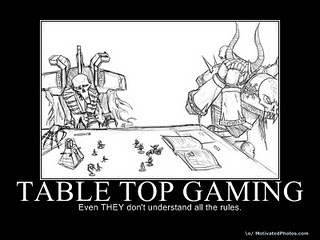 Why do most consumers feel the need to have their adventures told to them rather than they share in the experience in creating their own world? Has using your imagination become too much of a hassle? Is it really too much work to picture your character and the world around them instead of looking for the latest detailed online game to hit the market? I am kind of torn on this, on the one hand I welcome the new strides we make in gaming technology but on the other hand I feel that it comes at the sacrifice of a gaming experience that no computer could ever hope to match up to.

Its great when I hear about fan communities that keep that alive.

Whether it be a huge group of folks who LARP (Live Action Role Play) in public parks or just three good friends who spend a Wednesday night playing a game of Planescape it gives me hope that there are still gamers out there who would rather throw a pair of 20 sided dice than sit in front of a computer clicking away.

In this article:Nostalgia, Toys/Games, Video Games/MMOG, Written by David Arroyo