When people ask how Daniel Tosh of “Tosh.O” and I first got together, if I’m being honest, I’ll be forced to admit the details remain foggy. What I remember for sure is the introduction came through one of my friends, who insisted on the subsequent set-up after discovering here we were, well into the Summer of 2010, yet I’d never laid eyes on the show.

After viewing just one episode, it was love at first sight, which is a rare occurrence for me, usually reserved for the Tina Feys and Joel McHales of the world (and settle down, you two: there’s room in my heart for everyone). But damn if Tosh didn’t immediately steal my heart. Was it his perma-smirk? The way he lets his viewers choose what hipster cardigan or jacket he’s going to wear and eventually retire? The fact that he refers to his home state of Florida as “Flat, hot, and dumb”? The way he ever-so-delicately dances right up to and slightly over the line of what’s politically correct? 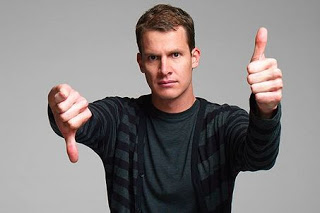 Check the box marked “All of the above.”

And while he may not have much to do with finding the internet clips featured on his show, I’m impressed by how many are ones I’ve never seen before. What really makes the show though, of course, is his ability to dissect each one with just the right amount of clever sarcasm and a touch of meanness you can’t help but forgive. His commentary shocks me sometimes, but only because it’s often something I’m thinking myself but don’t have the balls to say, at least not without a thousand disclaimers that I’m just kidding.

One of my favorite bits from the show is when he puts 20 seconds on the clock to see just how many punches he can throw at a particular clip within that time frame:

I’m also equally enamored with his “Web Redemption” segment, where he actually tracks down people featured in the very clips he’s making fun of to give them a “do-over” of sorts. For example, here’s a clip featuring a sobbing (and obviously drunk) college girl who decided to spray a fire extinguisher in her sorority house because she wanted it to snow (yes, you read that right):

And here’s the redemption:

So where is this new relationship going to go? Who can say for sure, but if you’re asking me if I can envision spending the rest of my life living in a Tosh.O world, the answer is of course – as long as he’ll have me. In the meantime, I think I’ll start perusing American Apparel and Urban Outfitters for his next cardigan. You know what they say in Girl Scouts: always be prepared.