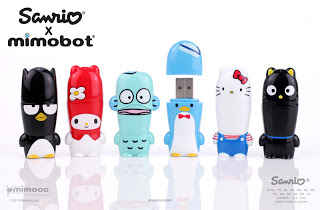 Mimoco (www.mimoco.com), makers of MIMOBOT designer USB flash drives, is rolling out their second wave of Sanrio characters as part of their “small gift, big smile” philosophy. The new designs include Badtz-Maru, Hangyodon, and the classic Hello Kitty.

These drives join the previously released Chococat, Tuxedo Sam and My Melody.

“We continue our collaboration with Mimoco by introducing Sanrio fans and MIMOBOT collectors to a new line of USB flash drives to celebrate our 50th Anniversary,” said Janet Hsu, President of SANRIO, Inc. “In addition to Hello Kitty, we are bringing some of our fan-favorite characters into MIMOBOT form for the very first time. The collection falls perfectly in line with our ‘small gift, big smile’ philosophy.”

The new SANRIO MIMOBOT flash drives are offered in memory capacities ranging from 2GB to 16GB and come pre-loaded with exclusive MIMOBOT-themed content like wallpapers, screensavers and videos specific to each character. MIMOBOT flash drives can be purchased online at www.mimoco.com.