“I have witnessed the tremendous energy of the masses. On this foundation it is possible to accomplish any task whatsoever.”

I just got back from China. 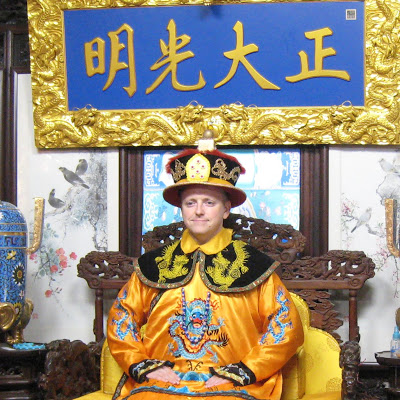 They made me emperor, as you can clearly see in the photo.

Actually I was only emperor of the Forbidden City gift shop for all of four minutes, but it’s easy to see how power can go to one’s head.

Chinese people do not drive well.

I was in China for less than two weeks and witnessed first-hand two auto fatalities and three non-lethal collisions. Traffic lights mean absolutely nothing over there, and the concept of waiting in line is completely lost on them. When I asked about this I was told that it is impossible to keep order among so many people. This is a total cop-out of course, but the sheer number of people does account for a lot.

In other words, if you were to take all the skyscrapers in Manhattan, then the entire downtown area of Chicago, and then add that together with every tall building in Boston and Los Angeles and San Francisco, and then multiply that times 50, there would still be more in Shanghai. That city has the most impressive sky line I have ever seen. I thought they liked to live vertically in Japan, but they’ve got nothing on China. When I asked what was the obsession with tall buildings I was told, “We have a lot of people here.” Even if you’re one in a million, there are 2,500 other people just like you in a country with two and a half billion citizens. They gotta live somewhere…

The major difference between China and every other place I’ve ever visited is that the tall building in Shanghai and Beijing weren’t just commercial buildings.

There were hundreds of residential buildings that were as wide as the Casino’s in Vegas and about twice as tall. There were so many that it was impossible to see where they began and where they ended. On the Bund, which is a groovy little area on the river in the center of the city in Shanghai, there are very impressive buildings all in a row, stretching for a mile or three, built by the European invaders prior to 1917. The architecture is breathtaking and includes Romanesque, Gothic, Renaissance, Baroque, Neo-Classical, Beaux-Arts and the world’s richest collection of Art Deco buildings. Right next to them and all across the Huangpu river are modern buildings the size of the Chrysler building stretching 9 miles in two directions, and in the Pudong business district they’ve got the Jin Mao Tower, the TV Tower, and the World Financial Center (affectionately known as The Shaver, for its resemblance to a Samurai sword), which is over 1600 feet tall, and with occupied floors and an observation deck at 1,555 feet above the street makes it almost twice as tall as the majority of other buildings in the area.

Most importantly, the Chinese seem to have a passion for building supertall skyscrapers, as other cities like Guangzhou, Shenzhen, Shenyang, and Tianjin all have multiple buildings under construction that will boast a 1,000 foot roof height or better (some up to 2,000 feet!), and if you look at a listing of the world’s tallest buildings, an overwhelming majority of them are in China.

Not surprisingly the Chinese food is excellent, and the only food that made me feel ill was served in a rather expensive European restaurant in the French Quarter of Shanghai. The best Shabu Shabu I’ve ever eaten was in Beijing about a week ago. The pork buns and many variation of buns and dumplings were unbelievable. I wish I ate shellfish, because the scallops in the shell that my girlfriend ordered were the freshest I’ve ever seen.

Chinese fashion is pretty dope, too, and good, high-quality clothing is cheap.

I’m a westerner so I got bilked (apparently) compared to what the locals pay for stuff, but it was still ridiculously cheap. I got a pair of the new Darth Vader Darksidestar Adidas for 60RMB, which is less than $10. I also got some Louis Vuitton and Royal Order ties for less than $10 each, and I should mention that I have an eagle-eye for spotting bootlegs, so if these are knock-offs, I doubt that Louis himself would know the difference. But my big score was an obnoxious GXG silver silk suit jacket and pants that looks like something out of a Johnny To film. It was 1480RMB or about $200. I am going to be soooo Triad Badass in this ensemble that it’s not even funny.

Bootlegs are everywhere in China. Bootleg phones, booze, cigarettes –even bootleg moon cake! As we walked around town with our coach bags, I wondered how many people thought they were fakes.

Did I mention that the Shaw Brothers have their own TV Channel?

It was awesome. Old school chop-sockies and spy movies all day and night on Taiwan’s Celestial Cable Television Network.

We saw all the touristy places: The Great Wall (huge!), The Forbidden City (ditto), Tiananmen Square (there’s still a giant banner of Mao!), the Summer Palace (my favorite) and many other temples and markets, but my favorite place (aside from the subway shopping malls in Shanghai), was the Beijing Arts District, Daishanzi. I got to do a Gao Brothers’ studio visit, which has already proven to be life-changing. The political art in China puts the semantic political art of Paul McCarthy to shame. You can get killed for making some of the art I saw over there. Perhaps freedom does breed a bit of indifference.

I’ll be reflecting on this trip for a while, and I’m sure to post additional anecdotes in future columns.

The Chinese economy surpassed Japan to become the number 2 in the world while I was over there. From what I can tell, there is hardly any crime and I never felt threatened in any way. Nobody was rude, but I did get stared at a lot (being one half of an interracial couple). This trip made me realize that being encouraged to eat all of my dinner because there were people starving in China was probably not very true. I wonder if Chinese parents will use the reverse of that parable when China bypasses the US to become the number one global economy?

Of course, I don’t worry too much about them reaching number one.

Once they get there, they’ll still have to drive home, and the way they drive, that could prove challenging…