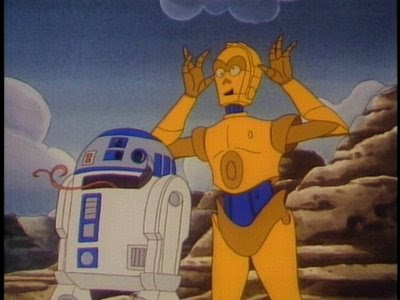 Happy 25th Anniversary to Droids: The Adventures of R2-D2 and C-3PO, which along with the animated  Ewoks premiered on ABC September 7th, 1985.

Some may remember the shows fondly, now that there’s 25 years of Vaseline covering the lens of our cultural memory — but, those with a clearer memory of the time frame may remember young nerd rage over the fact that the shows lacked the central cast (though we all remember whe Boba Fett popped up for an episode — and man, was that action figure hard to find!) and presented the characters in a goofy sit-com-y light which was the style of that era of Saturday Morning entertainment.

Either way, it was a portent of things to come — when Papa George would roll out the prequels a decade and a half later. Interestingly enough the Droids cartoon is referenced in the prequels numerous times (they attend the Boonta Pod Race — well for the second time I guess, General Grievous rides Jann’s bike, and they share locations such as Utapu) making the show canon.

Besides having one of the worst theme songs in Saturday Morning history, the Ewoks show had the questionable distinction of following up the two live-action Ewok TV movies, which in my opinion you could take or leave. Like most 80s cartoons the show got progressively dumber as writers and producers aimed lower to be “more kid-friendly,” and depending on your take on the Ewoks as characters to begin with this wasn’t necessarily a far slide. However, they were able to tie the whole thing up nicely in the final episode, when the Empire shows up having discovered the location for their new Death Star bridging this show directly into the films, as well.

Truncated DVD editions of both shows were made available in 2004, as a lead up to Revenge of the Sith, but neither are currently in print. However, with the super duper new cuts of the trilogies rolling out soon, one can expect that Lucasfilm will dust these shows off to further cash-in on the franchise.