“Art is the imposing of a pattern on experience, and our aesthetic enjoyment is recognition of the pattern.” –Alfred North Whitehead 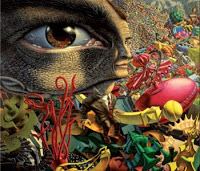 It was a self-deprecating term he used to describe his paintings, and the word stuck in the art world vernacular forever after. His influence has been felt in virtually every painter to follow in the genres of Lowbrow and it’s classier-named offspring, “Pop Surrealism.” This year, a new exhibition at Shafrazi Gallery, which then traveled to Cal State Northridge, garnered acclaim from many of the fine art publications that used to shun him (though Robert is fond of publicly quoting a less-than-aggrandizing review in the New York Times) and he was included in the Whitney Biennial. A documentary, Mr. Bitchin’, was released theatrically after fifteen years of production, and it debuted at the Los Angeles County Museum of Art. On Saturday, at the Beyond Eden Art Fair at the Los Angeles Municipal Gallery at Barnsdall Park, I get to hand him an award.

I’ve been lucky enough to be acquainted with Robert Williams for most of my adult life at this point. I met him for the very first time in 1991 at La Luz de Jesus Gallery during an exhibition of paintings by his wife, Suzanne, who was showing alongside Joe Coleman. It was the very first time I stepped foot in the place, and here I was standing next to Robert Williams, who I recognized from an interview I’d seen on Stuart Shapiro’s Impact Home Video. I’d long been a fan of his underground comix, and I’d bought the “Appetite for Destruction” LP before I’d ever heard a note of Guns N Roses’ music because its cover was a 12″ x 12″ reproduction of Williams’ 1978 painting.

I got a job with that gallery about two months after that chance meeting, and I got to hang two exhibitions of his work in the years that followed. My love of art, which had been great beforehand, blossomed and fruited in that environment, and in many ways I can trace it all back to Robert. He was such a nice and genuine guy. He seemed dumbfounded that anybody could be starstruck by him, and I saw it happen on a regular basis –usually from other artists. The degree of insight he has for painting technique, theory and history is pretty much beyond that of anyone I know, and in all three categories. His knowledge of hotrods and unicycles is absolutely off the charts, and his familiarity of garage rock is invariably up-to-date. Most importantly, all of that scholarship is housed in the most unassuming and gracious person that I’ve ever had the pleasure to meet.

I’ve never thanked Robert for the love of figurative and narrative painting that his art and charm helped instill in me. As a matter of fact the only payback that he’s ever gotten from me is counter space at the Apple Pan on a particularly crowded Friday night.

Until Now. It’s my great pleasure to present a Lifetime Achievement Award to Robert Williams. I know that it isn’t the greatest award he has or will receive, but I’m certain that it’s the most important award that I’ll ever give.

In this article:Art/Design, Comic Book Movies, Written by Matt Kennedy