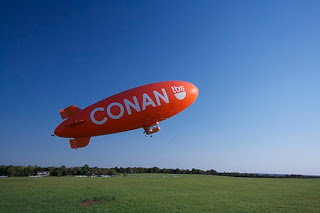 The Conan crew has kept everything under wraps pretty well, only parceling out commercials here, Andy Richter’s return there. Oh, and the giant orange blimp over Major League Baseball playoff games.

But as the show is now weeks away from its Nov. 8 premiere, Team Coco is giving a peek into their world with a live, 24-hour party in the stairwell of their comedy bunker.

Check out the action while you still have the chance!

You can also follow the action on Team Coco’s social outposts:

In this article:Internet/Social Media, Television, Written by Marvin C. Pittman