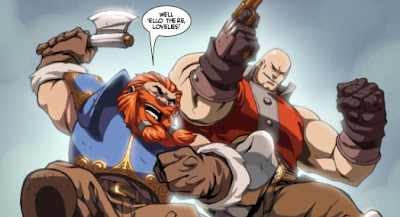 For a comic that launched on September 22nd by a fairly unknown creative team, Skullkickers seems to have found an audience.  With the second printing in stores tomorrow, and a third print on the way and fairly positive reviews all around, it’s a pretty impressive debut.  In less than a month, Skullkickers and it’s creative team of Jim Zubkavich, Edwin Huang, Chris Stevens and Misty Coats have found what every comic book wants and needs, an enthusiastic readership.
FOG! had the opportunity to talk to Jim about the book.

For those unfamiliar with the book, describe Skullkickers?

In short, it’s a buddy cop film slammed in to Conan – two mercenaries mash monsters in a fantasy world, getting embroiled in political plots and demonic danger and the only way they know how to get out of it is to slay everything in their path.

What’s the genesis of the concept and how did the rest of the creative team get involved?

The concept grew out of some brainstorming I had with Chris Stevens (the original Skullkickers artist who is now contributing covers to the regular series) for a pair of short stories in Image’s Popgun anthology series.

He wanted to illustrate a fantasy story but didn’t want it to be typically magical or generic and I suggested something more earthy and ridiculous for the baseline we could use. He enthusiastically jumped on board and we created short stories of these two characters for Popgun volumes 2 and 3.

When developing Skullkickers for the Popgun books, was the concept something that you thought would be a great series of self contained short stories, or did you have a larger tale that you wanted to tell?

I thought that at first it would just be a running gag in Popgun, short stories about these two monster killers that always paid off with a gag.

Once Image responded positively to those though and I brainstormed more ideas I realized the concept could be expanded out to encompass a lot of my favourite fantasy tropes and that these two lunkheads would be great at the center of something bigger and more involved.

What comics or comic creators have had the biggest influence on both you and specifically on Skullkickers?

Comic-wise it’s a combination of Robert Kirkman, who created a tightly wound self-contained continuity for his comic that’s easy to jump on to and enjoy, Brian Clevinger, whose Atomic Robo is the standard bearer for fun action comics and Mike Mignola’s Hellboy for showing how to successfully blend influences together to make something entertaining and rich.

Your day job is as a project manager at UDON. Was it ever a consideration to publish through them?

It was, but UDON’s brand has very distinctly cornered an Asian-influenced comic and art book market that Skullkickers is not a part of. UDON is like family so of course it was weird creating a book with another company, but Skullkickers is not an anime/manga-fueled book so it made sense to have it elsewhere.

I’m hoping to have new UDON projects to announce soon though, so I’m definitely still involved in a lot of what UDON is doing.

Skullkickers is an immediate hit. Do you feel any additional pressure going forward?

It’s a hit in terms of unknown creators launching an indy title. We still have a ways to go before I’d call it a hit through and through. Don’t get me wrong, we’re thrilled about the initial response and the book’s potential, but I don’t want people to think we’re resting on our laurels. The book is on schedule, we’re working hard and pushing aggressively forward to make sure we’re not losing the momentum we’ve built so far.

Do you have any other projects that you are working on in addition to this series?

I do, but they haven’t been announced yet so I’ll have to keep those close to my chest for now, unfortunately. If Skullkickers continues to do well I’m also hoping to pitch some other ideas out too. It’s an exciting time.

Locke & Key is one of the best comics published in years. Its emotional depth and intriguing facets keep surprising and entertaining me.

Adam Warren’s Empowered is a real surprise because it takes what should be a one-note ridiculous fetishistic concept and adds all kinds of character study and sharp dialogue to it. Adam’s incredible art doesn’t hurt, either.

I haven’t had many chances to play video games lately with my intense work schedule but I squeeze in some time for Left 4 Dead 2 and Mario Galaxy 2 when I can and they’ve both been quite enjoyable.

I’m obviously excited to see how The Walking Dead TV series is when it comes out. I’m trying not to overhype it in my mind, but all the pieces seem to be coming in to place for a spectacular show.

Be sure to check out the official Skullkickers site HERE!
Comixology is hosting the free preview issue #0 which contains the two previously published Popgun short stories.  Check it out HERE!