Writer/artist Jerry Robinson has been a significant presence in comics for more than seven decades, beginning with his work as an artist, then writer on Batman. During his time on the book, he would create two of the most enduring characters in popular culture, Robin the Boy Wonder, and the Joker. It would be easy to hang the rest of his career on that notable accomplishment, but Robinson could never be mistaken for complacent.

Over the course of his career, he has worked in every genre you can think of, from superheroes to war and westerns, to licensed properties such as the Green Hornet. He’s illustrated books and editorial cartoons, written manga, and become one of the foremost keepers of record in comics. To this day he’s kept busy: his autobiography, Jerry Robinson: Ambassador of Comics, was recently released by Abrams ComicArts; he expanded upon his seminal history, The Comics, which will see release early next year from Dark Horse; he continues to run the Cartoonists and Writers Syndicate he founded; and he has recently offered two iconic covers from his own collection, Fred Ray’s Superman #14 and his own Detective Comics #69, for auction at ComicConnect.com, beginning November 10th.

Forces of Geek was fortunate enough to speak with Jerry Robinson at length about his career past and present.

FOG: You’ve had such a career, but one of the things for which you’re best known is your work on Batman, from 1940-47.

FOG: At the start, you were enrolled at Syracuse. What were you planning to study?

JR: I was going to study journalism and creative writing, but I switched to Columbia when I met Bob Kane, just serendipitously in the country. He had just started Batman—the first issue was out—and he saw the drawings on the back of my jacket at the time, which I wore as a tennis jacket. I happened to be standing at the tennis court at this resort—we had both taken the week off. He had just finished the first issue of Batman, and I had just graduated high school. I was seventeen and I sold cream on a bicycle, hauling a truck around, a bicycle wagon. I had taken the week off to, as my mother put it, “fatten up,” so I could survive the first semester’s challenge. And so, when I met Bob, my application was still good at Columbia, so I switched from Syracuse to Columbia so I could come to New York, and started my classes and Batman almost at the same time.

FOG: So you were a full-time student with a pretty intensive job. How was it juggling that?

JR: Tough. (laughs) I was burning the candle at both ends, and I lasted about two and a half years before I had to end my classes and concentrate on Batman, which was so all-consuming. By that time, I saw that I liked the genre of narrative storytelling, and that I could write and draw together, so I didn’t feel I was giving up my writing career.

FOG: How was the comic book industry viewed by the general public at the time?

JR: Well, the general public were more or less indifferent. They didn’t know much about comic books. The kids related almost immediately, and that was the great impetus for the sale of comics. They grew out of the newspaper comic strip, which was an adult medium, as well as kids, but particularly for the kids. So the first comic books were really reprints of newspaper comic strips, starting in about 1934 and ’35. By ’38 and ’39, they had run out of suitable material in the comic strips, so they began to commission original work. And so, that’s what gave way to Superman in ’38 and Batman in ’39.

FOG: How was the dynamic between you, Bob Kane and Bill Finger at the time? I assume you worked pretty closely.

JR: Yes, very closely. Day and night. It was all-consuming.

We would draw Batman, eat Batman, sleep Batman, and think of ideas constantly. We would come up with new characters. It was a passion that we all shared. And it was exciting because it was a new medium, a new genre. There was no past, there was no precedent, so we should explore and experiment.

FOG: Around late 1939, 1940, there was some discussion about adding a boy sidekick character.

JR: Yeah, the following year. Bill Finger, the writer who created most of the characters and the whole mythos of Batman—there really should have been a co-creator credit, Kane and Finger—his idea was to add a kid to the strip.

He had been an avid reader, and there were all kinds of kids in children’s stories at the time, in hardcover books. He was extremely well-read in all sorts of literature, and I’m sure somewhere along the line he got the idea that you could extend the parameters of the story with the addition of a boy. 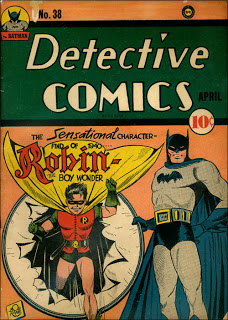 The next thing was to think up his name and costume, and after much discussion—names are very important in comics and all of literature, actually—we couldn’t hit on one, so I happened to think of Robin. I wanted a name that didn’t give the impression of being a superhero or having super powers, so Robin fit the bill.

I came to Robin because I was given a wonderful book of Robin Hood when I was about ten to twelve years old, which I still have in my library, The Tales of Robin Hood. They were illustrated by N.C. Wyeth, a very famous illustrator at the time, some in black and white, some in color. I pored over those drawings and read those stories so many times, so that’s how I came to think of Robin as a suitable name, and I designed his costume from my memory, which I knew so well. I didn’t have the book in New York, of N.C. Wyeth’s paintings of Robin Hood.

FOG: Aside of the name and look, how much more of Robin Hood did you try to work into Robin?

JR: Kind of the spirit of Robin Hood, of taking from the rich and feeding the poor and needy, and fit it in the whole concept of Batman as well as Robin. And Bill wrote the backstory of Robin being an orphan as was Batman, Bruce Wayne, whose parents were killed when he was young. 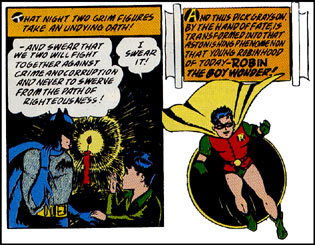 FOG: I don’t know how much you’ve kept up with the current Batman stories, but right now, Dick Grayson—Robin—is Batman. How do you feel about having a character who has endured and thrived to the point where he’s become the star?

JR: It’s an innovation I don’t know that I would have done myself, but you know, it’s lasted seven decades, so new writers and new artists take over and they have their own perception. But they kept the essential personas of the characters, and I think that’s what’s required. So I guess it’s somewhat of a tribute to the concepts that they have endured and can have as many interpretations as they’ve had over the years.

FOG: The Joker is the other really iconic character you created for the Batman mythos. I know you had a Joker card that inspired the basic look, but what else went into the characterization of the Joker?

JR: Batman was so popular in the first months of appearing in Detective, the publisher said, “It’s time to put out a new book, Batman #1, containing all Batman stories.” Overnight, we were confronted with doing five stories, one for Detective and four more for Batman #1. 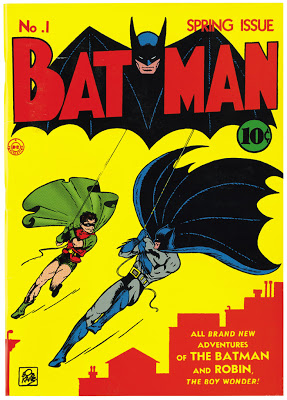 So it was a big burden on Bill Finger as a writer, who was the best writer in the field at the time, but he wasn’t that prolific because he was such a fine craftsman.

So I volunteered to do one of the stories, as they all knew stories I’d already written for Columbia and other places. I’d written a lot of short stories, and most of them were satiric in nature and had humor. Of course, my offer was readily accepted by Bill and Bob because they were confronted with getting #1 out.

For my first story, I decided to have a supervillain, although we didn’t use that term in those days—a major villain to confront Batman and test him.

At the time, it was the thirties when the villains in real life were gangsters: Pretty Boy Floyd, Al Capone, John Dillinger. I wanted to do something more bizarre, more of its own quality than a work of fiction might have, to be on par with the Hunchback of Notre Dame. And I knew all great villains had some contradiction in their nature, like all great characters.

I thought having a villain with a sense of humor would be different, and bizarre in a way. That was the impetus to do a story with a major villain I named the Joker, and once I thought of that, I thought of a Joker playing card for the visual. The Joker image has existed since the middle ages in one form or another as a clown or a jester, so it was a good image to pick up, to identify.

Once I did that, I knew it was going to be a great character, and it was immediately slated for the first story in Batman #1, so that was the beginning of it.

Part II of this interview will run on Friday!