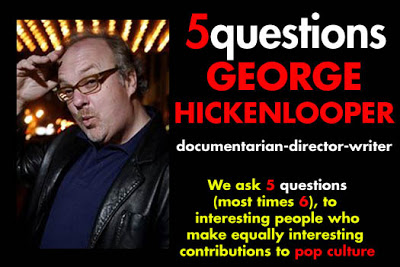 Filmmaker George Hickenlooper passed away suddenly last night.  No details as to cause of death, but preliminary reports are that he died of natural causes.

I interviewed George for my old site and have reprinted the interview below.  You’ll also find the trailer to his upcoming film, Casino Jack (referred to in the interview as Bagman).

This interview originally appeared on Forces of Good on April 26, 2008


After graduating Yale, George Hickenlooper moved West and interned for Roger Corman before launching his directing career.  Among his work, the documentaries “Art, Acting and the Suicide Chair: Dennis Hopper”, “Hearts of Darkness: A Filmmaker’s Apocalypse”, “Picture This: The Times of Peter Bogdanovich in Archer City, Texas”, “Mayor of the Sunset Strip” and “Being Mick”.  Among his narrative work, Hickenlooper directed “The Man From Elysian Fields”, “Some Folks Called it a Sling Blade”, “Dogtown” and most recently, “Factory Girl”.

Tell me about your latest projects.

My biggest influence is probably the writer Anton Chekov. Cinema influences would include Welles, Ford, Chaplin, Polanski, and Dziga Vertov.

Bagman is a feature I am developing about Washington Lobbyist Jack Abramoff who brought down Majority Leader Tom DeLay in the biggest scandal since Watergate. It’s a kind of Goodfellas in Washington.

If you were to have dinner with 5 fictional characters, who are they?

You’ve worked with some of Hollywood’s most legendary talents including Francis Coppola, Dennis Hopper, Peter Bogdonavich, Roger Corman and interviewed dozens more. Out of everyone that you have either met or worked with, who gave you the best advice regarding filmmaking and what was it?

Best advice came from Martin Scorsese: When your young make the films you want to make. Sell out later because you can never go back. I’ve decided to try to start selling out with my Abramoff project.