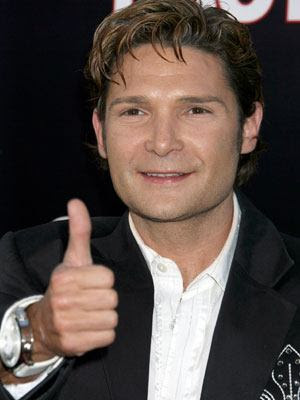 This weekend I had the opportunity to share a table with Corey Feldman while he was promoting the third Lost Boys movie: The Thirst at NYCC and was fascinated with not only the reasons why there is a third Lost Boys movie (Feldman admitted it was an apology for the horrible sequel The Tribe) but the fact that he still has 80s Flock 0f Seagulls-style hair. 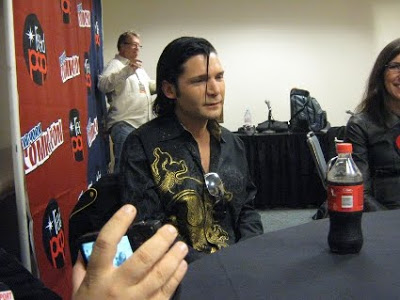 Which I found particularly Corey-ish.

You see, and I will admit it here, I kinda had a thing for Corey growing up. It wasn’t the same kind of passion that I felt for say, Ralph Macchio or 21 Jump Street star Johnny Depp, but it was there, and it was sweet.

So, naturally, when I looked up on all of his Corey-ness and felt the first stirrings of fan-love, the only real question that popped up into my mind was not about his vast movie career (including Friday the 13th: The Final Chapter, my introduction to Mr. Feldman), or his friendship with Corey Haim, but which music video in the 80s that he appeared in that sparked his musical inclination.

Me: Did your passion for performing music begin while appearing in Cyndi Lauper’s Goonies ‘R Good Enough video or Billy Ocean’s Get Out of My Dream and Into My Car video?

Corey (blankly staring at me): Neither…I started writing music when I was eleven…and it was because I was a fan of Weird Al Yankovic.

(It wasn’t until I got home and re-watched the Billy Ocean video that I realized that it might have been Corey Haim in the video instead of Feldman-I didn’t get a good look at the Corey Haim-ish looking guy in the video-but at least it was a song from the License to Drive Soundtrack so my question still has some merit…right?)

He went on to talk about being best friends with Michael Jackson and loving the pop music of the 80s and how his band, Truth Movement is still going strong after all these years (which began in the 90s), and he then refused to make eye contact with me for the remaining session of the round table interview.

And I don’t blame him.

I failed as a journalist. I should’ve asked him what it was like to reprise his role as a Frog Brother, or what it was like to have pictures of him still floating around the Internet forever chronicling his Michael Jackson phase, or was he ever surprised that his co-star in Stand By Me, Jerry O’Connell, seemed the least likely of the bunch to grow up to better looking than all of them but did? (I know I was).

But no, I asked about music videos.

So yes, I got to sit and stare at a guy I once dreamed about kissing when I was eleven and then promptly disgusted him with my idiocy. It was like re-living a typical Saturday night at the bar in the late 90s.

But, in the end, Mr. Feldman was kind, gracious, and down-to-earth and did not disappoint me as a human being.

So thanks Corey, you have officially been allocated space back into the spank bank after a 20 year absence, and I’m sorry about the being a dork.