I had the pleasure of meeting him in 1987 when I lived in Hollywood and worked at the Tower Records’ flagship store on Sunset Boulevard.

Sadly, I was the ONLY person in my group to recognize him. As he got closer to us, I looked right at him and said the usual, “Mr. Curtis, thank you for being a huge part of the movies of my life. “Some Like It Hot” is one of the FUNNIEST films ever made!”

He stopped dead in his tracks.

“Look guys, this beautiful young woman has made my day. I’m done hanging out with you suits – I’m going where she’s going!” We all laughed and he walked over to me and gave me a big hug (AND PINCHED MY ASS) while he thanked me for being so kind. I thanked him for being so nice, and that I was honored to meet a REAL HOLLYWOOD STAR in a city of so many wannabees.

I introduced him to my lame-ass friends, and he was very cordial. He even answered some questions about Marilyn Monroe, and told us how great Billy Wilder and Jack Lemmon were, and how much fun they had.

Oh, and he did that crazy Cary Grant accent from the movie for me! 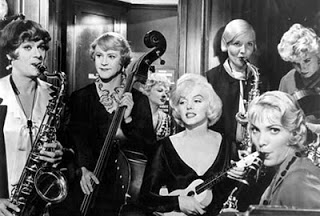 Then his manager said, “Mr. Curtis, we have a meeting to get to.”

Mr. Curtis said, “Pipe down, these kids know me!” and laughed.

He shook our hands as he said goodbye. He grabbed me for another hug and leaned in for a kiss.

Of course I went for it (when would I EVER get the chance to kiss TONY CURTIS) and puckered up. He tried to slip me his tongue while he grabbed my ass again.