Lil Wayne seems to be an apostle to the Gospel According to O’Shea. His latest EP I Am Not A Human Being is basically about that: sex, guns, drugs and money. (For the most part, Cube has covered these topics before Are We There Yet?) Not to mention the usual shitty metaphors. It’s bad because I’m reviewing this with my window up because it’s super humid. Now my neighbors are going to think I have bad taste in music.

To try something new, I will break down the Incarcerated Roachface’s latest offering, song-by-song. 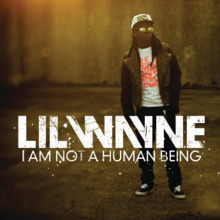 Gonorrhea Yep, he really called it that. No typo. Threats of violence? Check. Ooh, a Drake cameo. (Gonna be a long night.) Shitty metaphor: I’m ahead of my time like dog years. (Kids, stay in school. Otherwise you may end up halfwit rapper.)

Hold Up Atrocious. Mostly about shooting, fucking. Shitty metaphors: Too many to count.

With You Memorable line: Shorty bad like a three year old/She keep playin’ and I’ma eat her like a pita roll….Me and shorty go together like chemicals. Ladies and gentlemen, Lil Wayne’s sensitive side…sort of. By the way, a pita roll? Pretty sure pita is considered bread and not a roll.

I Am Not A Human Being Rock-tinged track. Like a poor man’s “99 Problems.” Memorable line: Name a motherfucker deeper than me, bitch. Dig? Get it, dig…deeper. Oh man, that’s good. I think part of Wayne’s problem is that he tries to come off as this “alien/wacko guy who due to his extraterrestrial DNA is some sort of super rapper. (Like Superman maybe.) But the truth is he’s on okay rapper who relies to heavily on metaphors, lacks heavily in content and does enough drugs to take on this rock star persona. Something like Kurt Cobain but without the deep-seated mental problems. Just my take.

I’m Single Wayne fights with his girlfriend. So he goes to find another girl to fuck. Stay classy. Memorable line: I make her feel special like a placekicker. This might be the worst line I’ve heard tonight. Fesh would call that “tarrible.” (Feshler-to-English translation “terrible.”)

What’s Wrong With Them This is my first thought about people who like Lil Wayne. Nicki Minaj on the hook. Yawn! Memorable line: Sanity kills so I lead the crazy life. Oooh. So mysterious. Again, that pretense that he’s so different when he’s just the same.

Right Above It About his debatable flyness. And it has Drake. (So this is masochism?)
Memorable line: Life is a beach I’m just playing in the sand.

Popular A song about fucking. Sweet. Memorable line: She’s a monster/I’m her sponsor.
Another helping of crap salad? Don’t mind if I do, Lil Wayne.

That Ain’t Me Oh it’s the inspirational song, where he won’t/can’t stop. Memorable line: I take giant steps like Shaq boots. Now, it’s memorable because it’s shitty but…I thought he was going to surprise me with a John Coltrane nod. (Silly writer. Shitty music is for kids…who have no idea who John Coltrane is.)

Bill Gates Just going to guess that this song will be about being rich. Just a hunch. Memorable line: Life is a bitch but I appreciate her. WOW! He said something that actually meant something. Granted, it wasn’t anything profound for anyone else. But for Wayne, this was his “I think therefore I am.” Maybe there’s something inside that head besides crap rhymes and codeine. (Blogger’s note: No, probably not.)

Well, I’m glad this is over. That’s a few hours out of my life that I’ll never get back. But you know that’s the risk of a Lil Wayne recording and deciding to critique it. I should have known better.

In this article:Hip-Hop/Rap, Music Review, Written by Jay Williams