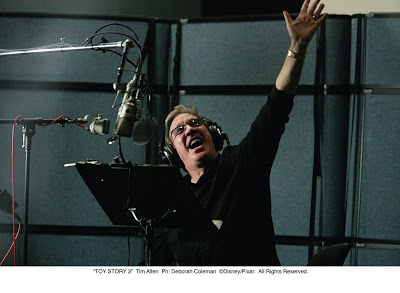 For three films, Tim Allen has voiced Star Command hero, Buzz Lightyear,  from infinity to beyond.

With Toy Story 3‘s release on DVD and Blu-ray on November 2nd, Allen took some time to discuss the films and his intergalactic ranger counterpart.

This is the 11th full-length animated film from Disney/Pixar. What makes audiences worldwide embrace Pixar films?

The people at Pixar are great storytellers and great movies start with a great story.

What can audiences expect from “Toy Story 3”?

“Toy Story 3” is a remarkable achievement with a story that is so good they could have marketed the storyboard version. Even though I knew the story and had read the ending, it grabbed me in the best possible way. I know audiences are going to have the same reaction. There are great action sequences, but the beauty of the movie is the evolution of the subtleties in the shot selection and how it is directed. Pixar just keeps getting better and better. This is a very simple story about friendships and staying together. I love that the ending is really a new beginning. You realize that one door shuts and another one opens. It’s very, very emotional.

What are some of the obstacles that the toys face as Andy prepares to leave for college?

In “Toy Story 3,” it is all about second chances. The toys are thrown away by mistake and end up in a daycare center. At first it looks like heaven for these guys, but they are placed with a group of kids that don’t know how to respect toys and they break them. It becomes an absolute purgatory for these toys. So they have to find a way to get themselves back home.

What adventures does Buzz encounter in “Toy Story 3”?

In this third film, Buzz gets to expand his role. When he accidentally gets reset, he speaks perfect Spanish. He’s a conquistador and a bull fighter. It’s pretty hysterical. I really do like being Buzz. He’s a lot of fun to play.

Can you give us a sneak peak at some of the new characters and voices in “Toy Story 3”?

I like the new toys. Jeff Garlin does a great job with the unicorn, Buttercup. Timothy Dalton plays Mr. Pricklepants who is a theatre-loving hedgehog who takes the craft of acting very seriously. He is just wonderful. And Michael Keaton brings alive the character of the Ken doll. I laughed so hard at the scene where Ken does a fashion show for Barbie. It was hilarious.

What other character would you like to play if you could not be Buzz?

I like Mr. Potato Head quite a bit and I am beginning to really like the new hedgehog character, Mr. Pricklepants. Ken is very interesting and he is real super deluded. However, in the end, Buzz is really who I like to be. It’s a character I developed with John Lasseter.

Friendship is a major theme in the “Toy Story” films. What makes the relationship between Buzz and Woody work?

I think their relationship works because they accept each other’s limitations. Woody is honest and he wants to do everything for the group; it’s always about other people. Buzz is a doer and a fixer. Give a job to Buzz and he will get it done. There is an overall respect for each other and this makes for a great relationship.

The original “Toy Story” was released in 1995. Over the course of that 15-year span, what would you say is the best thing about playing the role of Buzz Lightyear?

The great thing for me about working on the “Toy Story” films is the great friendships I’ve made with all the people at Pixar and with Tom Hanks. Tom and I really like working together and being around each other. I totally respect his talent and I think he feels the same about me. We really do enjoy each other’s company and I value that.

Can you talk a little bit about the process of voicing an animated character?

Being in an animated movie is much more difficult than you might imagine, especially for a live performer. As a comedian, I tend to run on and ad-lib because I get bored very quickly. So it can be long sessions in the recording booth. There are also whole days that you just do grunting and panting and breathing just so the animators can match it to the characters. It’s an incredibly complex mechanical process that ends up on screen as an amazing, fun experience. It’s like watching magic.


In “Toy Story 3,” Andy is going off to college. Could you relate to Andy’s dilemma of having to leave behind his treasured childhood toys?

I did have a box of stuff with toys that I played with in my formative ages. My parents went through a flood and some of it got destroyed, but my best stuff was always protected. I still have the box and now it’s down to six things. This is what the movie is about; a kid is going off to college and what is he going to keep? Now if I were the kid, I would pick a Buzz Lightyear doll because you could say that you collect classic toys and no one would laugh at you. They would think that a spaceman is cool, but if you have a stuffed cowboy…come on! [LAUGHS]