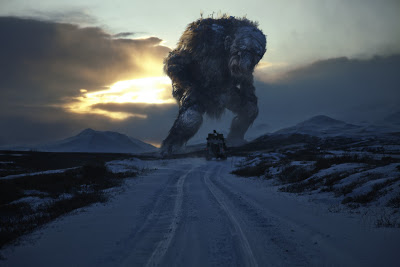 Magnet Releasing, which is quickly becoming a powerhouse in acquiring and distributing some of the best genre material being produced, has just acquired one of the hits of the recent Fantastic Fest, The Troll Hunter.

Magnolia’s Magnet Releasing Captures THE TROLL HUNTER for the World

New York – October 18, 2010 – The Wagner/Cuban Company’s Magnet Releasing, genre arm of Magnolia Pictures announced today that it has acquired World rights excluding Europe to writer/director André Ovredal’s THE TROLL HUNTER, produced by John M. Jacobsen and Sveinung Golimo. Shot in a vérité style, THE TROLL HUNTER is the story of a group of Norwegian film students that set out to capture real-life trolls on camera after learning their existence has been covered up for years by a government conspiracy. A thrilling and wildly entertaining film, THE TROLL HUNTER delivers truly fantastic images of giant trolls wreaking havoc on the countryside, with darkly funny adherence to the original Norwegian folklore.

“THE TROLL HUNTER is one hell of a ride, with trolls the size of King Kong,” said Magnet SVP Tom Quinn. “André Ovredal has created a one-of-a-kind creature feature that’s sure to entertain and wow audiences all over the world. We’re extremely proud to add it to the Magnet slate.”

“The interest in THE TROLL HUNTER from around the world has been overwhelming,” says producer Jacobsen. “But it became clear to us early that Magnolia/Magnet would be a perfect fit both for us and for the film. We are really excited to be working with them on this movie.”

The deal for world rights excluding Europe were negotiated by Magnet’s Quinn with producer John M. Jacobsen. Magnet will release the film theatrically in 2011.