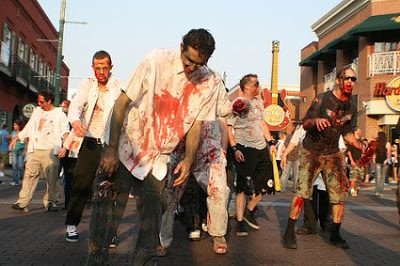 They’re coming for you Hiro…

American society (at least in the last twenty-five years) has created a generation of pussies.

The youth of today are over-protected bastards who, for some unknown reason, must be protected from a myriad of things like hang nails, bruising, and low self-esteem so that they will never have to feel the pain of surviving in the world.

Which is why, when the Zombie Apocalypse comes, I am heading to Japan and hiding behind a bunch of toddlers rather than staying here and watching as a bunch of tweens desperately try and “Tweet” their way out of being devoured by mutated humans.

You see, in Japan, parents want their children to be prepared for the walking undead and have no problem allowing a zombie into their homes to scar and torment their youngsters while imparting wisdom such as “hitting the zombie in the heat with a plastic gun will slow them down”.

Think I’m kidding? Watch the video after the break as a group of Under-Sixes kick some ass and ask yourself, “What side of the world will you be on when hell breaks loose?”