ShareTweet
Over the past few years, my buddy, Brook Durham has been racking up the credits, writing several films for SciFi SyFy.
Starting with his first credit in 2006, Brook has written Mammoth, Showdown at Area 51, Odysseus: Voyage to the Underworld, Riddles of the Sphinx and Merlin and the Book of Beasts, attracting such genre friendly names as Summer Glau, Arnold Vosloo, Christa Campbell, Dina Meyer, Gigi Edgley, Laura Harris and James Callis.
His latest film, the anticipated Red: Werewolf Hunter stars geek icon Felicia Day in the lead role and premieres this Saturday night at 9PM on SyFy.  Brook took a few minutes to chat about the project.

How would you describe Red?

It’s a noun, defined as “any of various colors resembling the color of blood.”

In a hundred and seventy words…

Forget everything you thought you knew about the story of Red Riding Hood, here is the truth that has never been told. 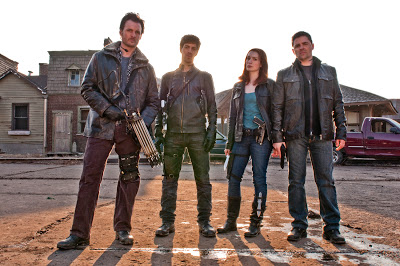 Red Riding Hood’s Grandmother was killed not by a wolf, but by a Werewolf, and from this tragedy sprang a young woman who would become the first in a legacy of hyperaware Werewolf Hunters.

Virginia Sullivan is a modern descendant of Red Riding Hood, trained to be a Werewolf Huntress since she was old enough to walk.

For her, growing up in the Sullivan family has meant being burdened with an unthinkable fact: our world is cursed with the “evil” of Werewolves, beasts so brutal and terrifying the knowledge of their very existence has been relegated to the realm of myth and legend.

When we first encounter Virginia she is doing her best to fulfill her incredible destiny, and at the same time, attempting to have a normal life by bringing her fiancé home to meet the family, hopeful he’ll be accepting of the family business.

What kind of research did you do?  What media did you look at or revisit?

Other than hunting Werewolves in the mean streets of Los Angeles, I began by reading the various incarnations of the Fairy Tale. I found this to be incredibly insightful as it struck me as to how crafty and cunning the Big Bad Wolf was in luring his victims, behaving very much like a contemporary serial killer. This observation inspired the “Big Bad” in Red to have some unique abilities as well as a unique point of view on being a Werewolf. 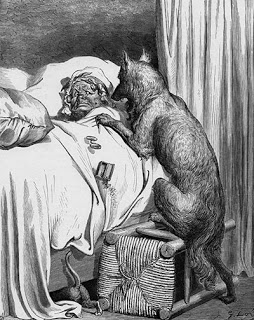 When I work on material inspired by a Legend or a Fairy Tale, I like to see if there’s a new spin I can come up with that hasn’t been done before and takes the story in a new direction. In this case, I wanted to find something original to add to the Werewolf lore.

I don’t want to give up any spoilers but my conversations with the Producer, Angela Mancuso, and the execs at SyFy led to some very cool elements that I think people watching will find interesting. 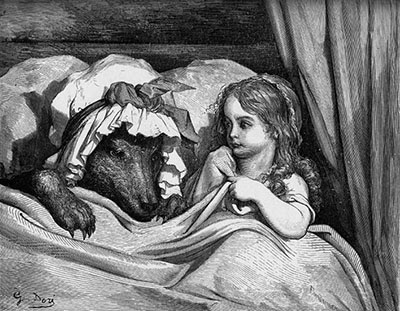 What are the challenges of writing a television movie with eight acts versus the traditional movie structure of three acts?

The challenges are essentially the same, trying to keep the audience engaged by the story, finding an interesting act break that twists the story in a new direction or surprises us, all while making sure the characters are engaging and feel like real people despite facing fantastic situations. 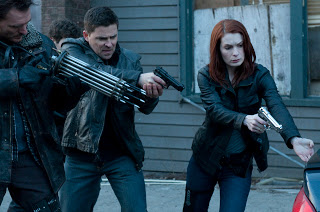 Specifically with the SyFy Movies, I have to do the same thing you would do in three acts, just more often and more compactly, so I have to be conscious of the pace, always trying to end each act with a cliffhanger, or with a character being killed off, or showing the heroes under attack by the monster, or ending with some kind of big reveal that twists the story around and changes the stakes.

Screenwriting is often considered the blueprint of a project and with film being a collaborative medium, are you protective of your words or do you find yourself disappointed or pleasantly surprised with the finished interpretation?

I’m never married to the words on the page and I’m always open to ideas that make the story better. Screenwriting, for the most part, is a solitary endeavor, so it’s always a thrill to see the things you’ve written come to life. That said, sometimes, a scene will be shot exactly as I described it on the page and it just doesn’t come together the way it worked in my head. Other times, the Actors or Director have infused elements that were better than how I had imagined it.

Generally, as long as the intention of what I wrote comes through in the finished movie, I’m happy.

I wrote Witchslayer which is the SyFy version of the Hansel and Gretel Fairy Tale. The movie is currently in post and Shannon Doherty stars in it.

I wrote a kids book over the summer that will be going out to publishers shortly and I have a couple of series projects as well, which I hope I’ll be able to talk more about in the very near future.

30 Rock is always worth tuning in for just to hear what Jack Donaghy has to say each week.

The alternating episodes/parallel storylines on Fringe are fascinating to me. I can’t wait until they both converge.

Really enjoyed the first two books of The Hunger Games.  Haven’t delved too deep into the third book, Mockingjay, just yet but I’m looking forward to it.

Other than that, I’m excited to see Red this Saturday night on SyFy! 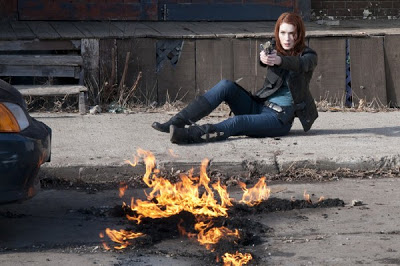