So, are zombies the new vampires or what?

A year ago I wrote this post in which I declared my desire for zombies to overtake vampires as the go-to undead creature of young adult novels, and my mild optimism that maybe, just maybe, this was really how young adult fiction was trending.

And a year ago, I was hella wrong.

Now I have no official statistics on the young adult publishing industry to back up this assertion or anything. I am simply going off the homogeneous look of the Borders Ink (that’s the Borders YA section’s official name) shelves, which are all moody black/white/red/etc. covers with, well, vampires on them.

Also, being the library nerd I am, I went to my local library’s OPAC and did a reverse-year-sorted subject search for “Vampires — Juvenile Fiction” which yielded a bagillion results (or 50 something) from the past year or so. A similar reverse-year-sorted subject search for “Zombies — Juvenile Fiction” yields…well, not nearly so many (less than 10). Plus, I happen to know that at least two of those zombie novels are sequels to zombie novels I read last October during my young adult zombie binge, so it is not even like the industry is pumping out super fresh zombie material even.

Alas, my friends, it seems that vampires are here to stay, at least until those wretched books are done getting made into movies. You know which books/movies I mean…but I’ve decided to stop mentioning them altogether for awhile. So too am I going to quit talking about the subject of vampires in conjunction with that of young adult fiction.

It’s true – I am seemingly the only person seriously concerned about the (apparently nonexistent since vampires are obviously the winners) fight between zombies and vampires for young adult novel supremacy.

The real “Zombies vs….” zeitgeist is not concerned with zombies vs. vampires at all, but with zombies versus a whole bunch of other things that make for far more engaging match-ups.

Zombies vs. Humans (or officially I guess it’s Humans vs. Zombies) is something I only just found through the autofill on my Google search for “zombies vs “. If you are unfamiliar with it, as I was, check out this website with all the info. It’s a moderated tag game across college campuses – there are “zombie” hoards and nerf guns involved and it looks MARVELOUS.

Of course I lived in a constant state of fear during the half a day I survived my freshman dorm’s game of “Assassins” so I kind of doubt I could handle the fear I might experience during a game of Humans vs. Zombies.

I’d be willing to try though, just for the sheer awesomeness.

Also, Colbert talks brilliantly about this phenomenon here at ThreatDown #1 (“Didn’t you ever hear the story of the boy who cried zombie?!?”):

I also have sort of similar/related reservations about zombie pub crawls. Imagine you are a little drunk and some zombie-looking fella comes all at you – you MIGHT try to decapitate the zombie thinking you were under attack….and how do you defend that in court?

“I’m sorry, your honor….I DID hit him in the head with a shovel, but in my defense I THOUGHT he was a zombie!!!”

Zombies vs. Plants (or I guess, technically, Plants vs. Zombies).

This little game consumed my life for about a week, when I stayed up till about 3a.m. several nights in a row playing it on my sister’s iPod touch. I still play casually, too, because you don’t want to get too rusty. I mean, what if Z-day happens, and I think it is a good idea to plant mushrooms during the DAYTIME without coffee beans? Or if I forget to put a Kernel-pult or a Melon-pult on my roof?

I shudder to think…I mean, I only have so many lawn mowers that will take those extra undead out!

(Do you love Plants vs. Zombies too? Because my sister and I have had exhaustive discussion about which plants we love to use and under what circumstances and which we hate even if they can be useful and general strategy, etc. For example, we know someone who HATES Potato Mines…but I LOVE Potato Mines: they only cost 25 sunshines and they make that delightful “Spud-DOW” sound when they go off! Anyway – comment about PvZ if you have feelings on it, because I’d like to hear!)

And finally, I’d like to talk about the most epic battle of Zombies vs. Something Else that we have seen yet.

I refer, of course, to that eternal struggle —

Zombies vs. Unicorns is a young adult novel which was published last month, growing out of many years of online debate between YA writers Holly Black (Team Unicorn) and Justine Larbalestier (Team Zombie) – it spread out widely among the young adult writer community (a community whose online activity I follow closely and which I secretly yearn to be a part of…we should be FRIENDS John Green, Libba Bray, Maureen Johnson, E. Lockhart, Scott Westerfeld, M.T. Anderson, just to name a few…)

John Green (oft-mentioned young adult writer who I admire to the point of obsession) is on team zombie and this three-year-old video offers his reasons for his allegiance. “I prefer the hard truths of zombies to the easy lies of unicorns,” he concludes, a quote which I still bust out on occasion because of its utter brilliance.

Still good, though….in the way that short stories for young adults about zombies and unicorns can be good, which is obviously a specific kind of good that will probably not appeal to everyone out there.

I bought this book on the very day it was released, in one of my biggest ever displays of lameness (or was it awesomeness?).

I confess, I actually haven’t finished all the stories yet. I like short story collections for this – I always feel like it is a-ok to take my time…savor them…save my favorite authors for last.

I actually have another confession to make too.

Obviously, I am into zombies. I enjoy a zombie film and I enjoy a zombie novel and I have some concerns (read: genuine anxiety) about the coming zombie apocalypse and this is my second column about zombies and I would really like to take a zombie fitness class.

Really, the richness of zombie culture never ceases to amaze me. 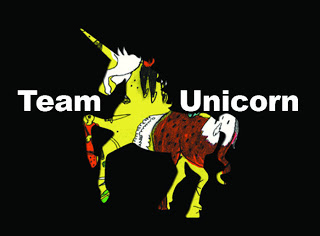 All the zombie entertainment in the world cannot wipe clean the Lisa-Frank-lovin’ six-year-old unicorn fan inside.

More on unicorns and my love of them….next time…