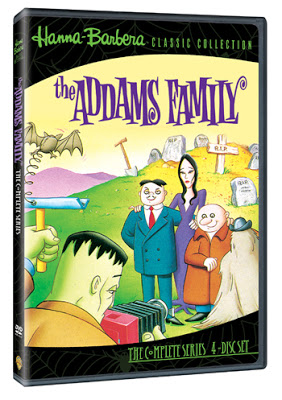 The Pitch
Be delightfully miserable with the Addams Family as they take to the road in their Victorian-styled RV for spooktacular cross-country quests only they can conjure. From Nashville to New Orleans, New Mexico and Hawaii, these peculiar parents – Gomez and Morticia – treat their family to misadventures, including outwitting a band of gold thieves, freeing the animals from New York’s Central Park Zoo and racing a horse in the Kentucky Derby. They even win a piece of the moon and with Uncle Fester’s rocket, the trip will be a blast! You may remember them as “altogether ooky,” but the spirit of this family is contagious!

The Review
One thing to be said about both the Warner Archive and Hanna Barbera cartoons is that there certainly isn’t a lack of variety.  After a positive reaction as guest stars in one of the original Scooby Doo movies, Hanna Barbera wisely turned the property into an animated series, combining the visual designs of cartoonist Charles Addams with two of the more recognizable voices from the live action series, Jackie Coogan as Uncle Fester and Ted Cassidy as Lurch.  The series is a departure from the sitcom, putting the characters in a Victorian Mansion styled RV, traveling from one location to the next, with a fair amount of kooky and a small amount of spooky.  Antics and hijinks are the norm here, with the traditional laugh track and slapstick.  The series is a lot of fun, with my only real disappointment is the lack of inclusion of the original Scooby Doo appearance.

Both nostalgiac fans and the curious alike won’t be disappointed adding this to their collection.  Recommended!