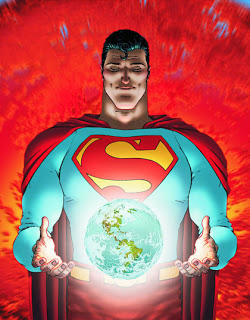 Every person, place, or thing that has inspired people has been made fictional (Martin Luther King, Ghandi, John Lennon…Jesus). While evidence may prove them to be real, to most observers they are bigger than life — made surreal or made fictional. So why wouldn’t Superman join their ranks as a motivational figure? To a young mind, his impossible feats can be compared to fighting for peace or martyrdom, a fact that writer Grant Morrison and artist Frank Quitley (both, whom collaborated on the spectacular yet simplistic “We3” and the truly uncanny “New X-Men“) wish to underline with “All-Star Superman,” a reminder of not just what makes “The Man of Steel,” but also what puts the steel in man.

Technicolored and painstakingly detailed, “All-Star Superman” tells the ethereal story of a Superman decaying from solar over-radiation. Ironically enough the sun (his power source) is killing him. Naturally, Lex Luthor had a little something to do with it but The Man of Tommorow’s greatest challenge isn’t megalomania but the guarantee of his earthly legacy. Have we learned anything from him? Humble as always, even Superman doesn’t know in the end. He’s too busy crossing off his list of people to save. 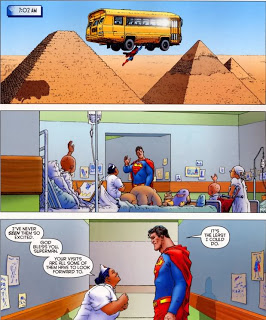 To understand “All-Star” is to understand the creators. Writer Grant Morrison must’ve waited for this moment. A walking, talking Sci-Fi/Fantasy himself, Morrison has been writing since he was 17 years old. This…alien, with his ability to make you believe every word he writes has fortunately made his home in comics. Rumor has it that he uses “magic” in his projects. Well, I don’t know if I believe in the stuff…but here is proof that it works. Artist Frank Quitely is possibly even more elusive (that’s not his real name, y’know). Like Morrison Quitely is also a Scot. His craftsmanship allows him to create “pop” that talks, breathes, and swells. There’s movement in the way our hero sits on gold clouds, stumbles into the Daily Planet’s main office, and gives a non-verbal “F*ck you” to Hercules in an arm wrestling match. Together, their collaborative efforts are about to allow them to join the ranks of Superman himself…that is, bigger than life and fictionalized. 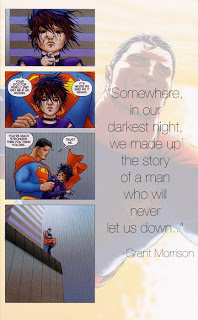 At just a penny shy of a $100.00, “Absolute All-Star Superman” may seem steep, however, the quality of the art and story along with the presentation of the hardcover makes it one of those rare acceptable purchases in the midst of a melting economy (if anything, my only complaint about the edition is that the colors aren’t as a vibrant when expanded to “Absolute” dimensions). In a best-kept-secret sort of way, “All-Star” is the “Fantastic Four” of the 1960s, the “Giant-Size X-Men” of the 1970s, or the “Watchmen” of the 1980s. It’s a book that has turned the comics industry in yet another direction and for that reason, it belongs next to all those unread inspirational autobiographies on your living room shelf.