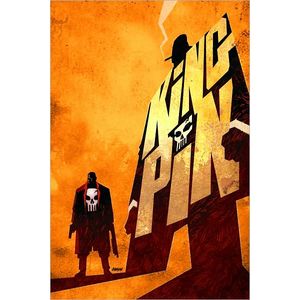 To my recollection, “Punisher Max: Kingpin” is Marvel’s first recognition that their adults only line (“Max”) is not part of the 616 universe. This mature re-introduction of Wilson Fisk (A.K.A. The Kingpin) is totally removed from his 1967 debut and pretty irredeemable by the story’s end. At the same time though, writer Jason Aaron seems to have a shameless appreciation for the character which, to some, may make the book feel more like “Ultimate Punisher” than “Punisher Max” by the end.

After years of being on the gun end of Frank Castle’s warped sense of justice, the Rigoletto crime family is ready to put their differences aside with the other crime families. Together they’re going to build a diversion, taking the old urban legend of a “Kingpin” of crime and making him real. They fill the streets with news of his impending arrival and create a convincing background check that is peppered with “fronts,” all in an effort to ensnare The Punisher. The executor and architect of this trap is Don Rigoletto’s right hand…Mr. Wilson Fisk. 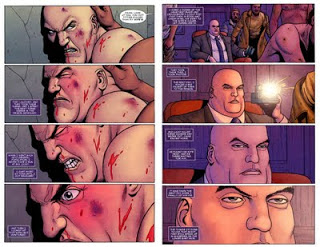 If the final page is any indication, writer Jason Aaron (“Scalped,” “The Otherside”) is clearly not put off by the convoluted Marvel mythos (unlike his predecessor Garth Ennis). Entertainingly, Aaron latches on to whatever he wants, chucks what he hates, and infuses plenty of millennial hostility to this over-the-hill villain (I have to point out though that Fisk is one of those few characters that hasn’t been over-exhausted by continuity). His approach is to de-construct but be respectful, and he does it successfully and within the parameters (or lack thereof) of the Max line. It’s a method that hasn’t really been attempted by previous writers of this particular series and, depending on how you like your Punisher, it works or it may feel a little too casual (yes, that’s even with the rape scene above).

Aaron is joined by artist Steve Dillon. Synonymous with his works alongside Garth Ennis (such as “Preacher” and “Marvel Knights Punisher”), Dillon’s art has never been useful with capes and cowls, however, his style has always managed to add a sense of dark humor to even the most brutal of moments. Here it is very apparent how useful his black delivery can be, especially when grandmothers and horses get slaughtered (trust me…it’s actually pretty funny). Aaron sets it up and Dillon delivers the punch line.

Admittedly, over the last decade, the Punisher has read better than most titles. This is due in no small part to the Ennis’ damn near decade-long run with the character (starting with “Welcome Back, Frank,” culminating with “Born,” and bowing out grace-tesquely with “Valley Forge, Valley Forge”). Understanding all that, Jason Aaron has some tall combat boots to fill but fortunately he’s got the right artist and the appropriate amount of gall to make it happen. 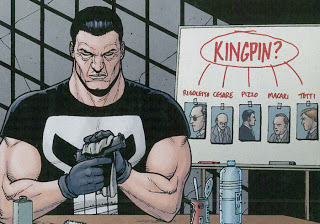