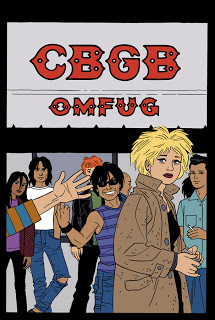 At the risk of disqualifying myself and sounding too young to understand, all I know about C.B.G.B. is that it closed a few years back to the dismay of many aging punk enthusiast. The New York City club was a representation of a bygone era that belonged to The Ramones (to which I noted to myself, without an ounce of sarcasm, “Hey, they did that Spider-Man cover a long time ago), Blondie (to which I asked myself, “Isn’t she like Gwen Stefani or something?”), and Lenny Kaye (to which I said nothing and ran straight to Wikipedia for enlightenment). Boom Studios has decided to recognize the punk rock institution by rolodex-ing the likes of Kieron Gillen, Jamie Hernandez and Rob G (all talents I easily recognize). Their works, along with several other short stories, has been collected for the “C.B.G.B. O.M.F.U.G.” trade paperback as a testament to the club’s heyday. But can it educate the ignorant in the process? Well… 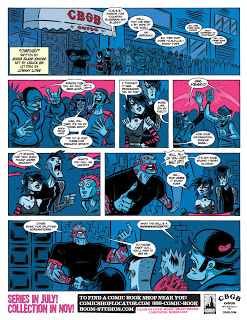 After a brief intro by Lenny Kaye and a single page comic about the club’s curious abbreviations, Gillen starts the anthology off. While his story (“An NYC Punk Carol,” about the ghosts of C.B.G.B.’s past — well, you get the idea) tosses around a ton of history, it does a solid job of capturing the excitement of a rock aficionado…an excitement that Gillen (“Phonogram”) clearly has.

Anthology books are always a mixed bag and “O.M.F.U.G.” is no different. While Gillen’s take on Dickens puts the book on a intriguing path, only Ana Matronic’s “Rock Block” (about a novelist who overcomes her writer’s block by discovering the New York club scene) and Robert Steven Williams‘ “Advice to a Young Artist” (about an aging music teacher who rediscovers his passion by taking a head trip down Bleecker Street) can match it’s feeling of pure worship. That’s not to say that the other creators don’t have reverence for the infamous music club (if anything, the artist seem especially eager to recreate the club’s interior in their respective stories), it just means that to an outsider looking in, their stories don’t quite hit that same inspirational chord. Some of that has to do with the reverberation of themes throughout each anecdote. Every writer in the anthology seems to be saying, “Just trust me, you should’ve been there.”

Hm. Then again, maybe that was the point.

Ah, well…for those of us who showed up late, there is always Wikipedia. 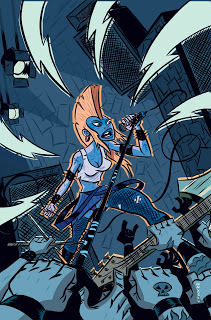