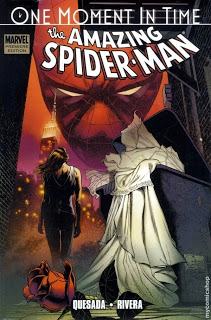 During his run as Editor-In-Chief at Marvel Comics, Joe Quesada has grandfathered many milestones.  He helped put Brian Michael Bendis and Mark Millar on the map (for better or worse, depending on your attitude towards them) and cajoled Grant Morrison and J. Michael Straczynski into writing two of Marvel’s most popular titles (and then sent them running for the hills). He got Joss Whedon, Warren Ellis, and Neil Gaiman on his payroll (if only sporadically), allowed the Avengers to regain prominence as Marvel’s premiere team book (although the X-Men suffered because of it), finally completed the JLA/Avengers crossovers (goddamn if that wasn’t awful), helped usher comics into the 21st century with the “Ultimates” line (and then quietly swapped it out with the regular Marvel Universe), and gained media attention with the Civil War event (which was followed by a feeeeeeeew too many crossovers). Yeah, if you look at it objectively, Quesada has probably had more hits than misses, yet his legacy as H.N.I.C. may be forever asterix-ed by the erasing of Spider-Man and Mary Jane’s 1987 marriage. The move angered even the most dedicated Marvel zombie and put the weekly sales of “The Amazing Spider-Man” on a see-saw. So what does Joe Q. do in the face of such antagonism? Well, he retcons the retcon.

Carefully written by Quesada (although, I’m sure he had a little help), “One Moment In Time” attempts to validate the retroactive separation with endless tinkering. It re-outlines the moments leading up to the marriage of Peter Parker and Mary Jane Watson and implies that their relationship was disfigured with additional ups and downs before the events of 2007’s controversial “One More Day.”

Okay, okay. This is mad convoluted and explaining continuity always gives me a headache, so I’m going to explain why all this happened with simple bullet points:
• Spider-Man revealed his secret identity to the world during Civil War.
• No, not THE Civil war but Marvel’s super event that pitted heroes against one another. Iron Man wanted all the heroes to reveal their identities so they could be registered with the government and turned into G-men.
• Why did he do it? Iron Man and Spider-Man are buddies and Peter felt it was the right thing to do.
• Revealing his secret identity meant that all his old villains we’re going to attack…and they did.
• Yes, he thought about that beforehand, but he assumed the government would protect him because he registered.
• They didn’t and Aunt May got shot by a hitman working for the Kingpin.
• Right. Why didn’t the government protect him? I don’t remember. I think he went AWOL. I forget. I think it had something to do with Captain America dying.
• *Sigh* Yes, Captain America is dead. Uh…was dead.
• Right. Who is the Kingpin? Uh…fat, bald, Michael Clarke Duncan — Look, stop asking so many questions! I told you it was convoluted. I’m trying to keep it simple!
• Okay. Where was I? Right. So Aunt May gets shot by a bullet meant for Spidey. Spidey takes her to the hospital and she is about to die.
• The Devil/Mephisto shows up and makes Spider-Man an offer to save her life.
• It’s the Marvel Universe, just run with it.
• The Devil tells Spidey that if he wants to save May, he has to give up his marriage to Mary Jane.
• Peter and Mary Jane agree.
• Admittedly, it was a really bad explanation.
• Spider-Man wakes up and nobody remembers his secret identity, Aunt May is alive, Mary Jane was never married to him, and everyone goes on with their lives.
• My head. 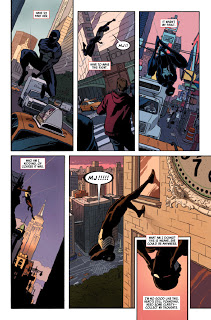 Since the retcon, the character of Spider-Man has been criticized by unloved fanboys as being nothing more than a pathetic divorcee but what Quesada successfully does with “One Moment In Time” is he underlines the fallible nature of the webslinger. Peter made another bad choice and now he has to live with it. Making Peter Parker a tragic character instead of a whiny bee-yotch isn’t always easy and Joe somehow manages to pull it off by validating the characters decision (and subsequently his editorial decision) with an exhaustive amount of rationalization. He pits Peter’s tag of “Power and Responsibility” against his marriage to Mary Jane and, true to form, responsibility always wins out. Sure, it’s the same old saw that made him the superhero he is today, but it has always worked. 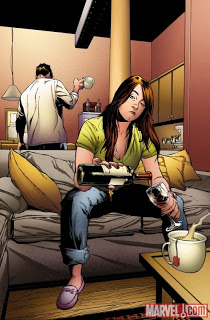 The editor/writer isn’t beyond manipulating the reader’s scrutiny to make you turn the page, either. The story drips with sentimentalism, yet the sappy stuff doesn’t work nearly as well for me as Joe Quesada’s artwork. Clearly, his art style has matured despite not displaying it in print on a regular basis. While Joe does not draw the entire comic (the book is told via flashbacks using the combined pencils of Paolo Rivera and Paul Ryan) he does draw the conversational bits that spark Peter and MJ’s revised walk down memory lane. His depiction of MJ is probably the most sensible and human I’ve ever seen the character. It’s just a shame that now that she is being dismissed from continuity that an artist has finally managed to strip her of her prototypical romance comic features and given her a style truly befitting of the label of “the girl next door.”