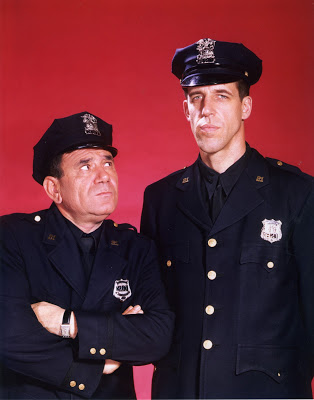 After the jump, check out the full press release and cover art as well as a clip from the fourth episode where Toody and Muldoon accidentally pull over a citizen for running a stop sign, then realize if they give him a ticket they will have to appear in court and miss their chance to go sword fishing.

CAR 54, WHERE ARE YOU?
THE COMPLETE FIRST SEASON 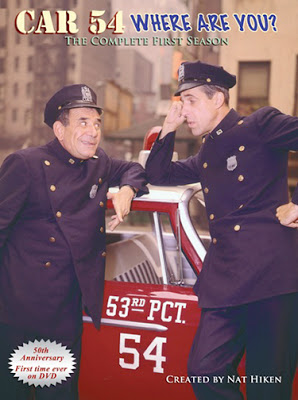 NOVEMBER 22, 2010 – Many critics and comedians believe that CAR 54 Where Are You? is one of the best comedy series ever to appear on television. Leonard Maltin calls it “one of the funniest TV shows of all time.” Carol Burnett, who worked with the show’s creator Nat Hiken, called him a comedy genius. In Carl Reiner’s words, “All comedy writers of Hiken’s day agreed that he had no peer.” Long out of circulation, this brilliant show can now be discovered by new generations who will have a chance to view it for the first time. In celebration of the series’ 50th anniversary, Shanachie Entertainment will be releasing all 30 episodes of the first season as a 4-disc DVD package on February 22, 2011 (SRP: $39.98). This is the first time the shows have ever been on DVD, now newly remastered from the only known set of 35 mm fine grain prints.

Specifically shot as a bonus extra for this release is a brand-new free-wheeling round table conversation between Bronx-raised comedian Robert Klein and two of the regular cast members –Charlotte Rae, who played Sylvia Schnauser, and Hank Garrett, who played Officer Ed Nicholson, one of the cops of the 53rd precinct. Rae and Garrett share stories, anecdotes and memories with Klein (a fan of Hiken’s work) that shed light on what went on behind the scenes.

Nat Hiken was already famous for his highly acclaimed Sgt. Bilko show, and when the opportunity to do another TV series came up, he threw himself into the task – writing, producing, casting and directing. Drawing on his 25 years of writing experience for top comedy shows on radio and television (Fred Allen, Milton Berle, Martha Raye), the result is one of his greatest creative achievements — a comedy rich with New York humor and filled with offbeat characters in scripts that were polished jewels of comedy.

The show is set in the Bronx’s 53rd precinct, where the cops depicted are all great comedic characters, as are the residents of the neighborhood they patrol. The central figures of the show are the Mutt & Jeff squad car team of Toody and Muldoon, played by Joe E. Ross and Fred Gwynne. In real life the actors were also an odd couple for the ages – the crudest burlesque comedian from the lower rungs of show business paired with a trained Harvard-educated actor. Muldoon plays the long-suffering voice of reason who invariably reins in his short stocky partner’s dimwitted schemes and patiently listens to his hilariously inane prattle.

The ensemble of supporting actors was perfectly cast. With a naturally shrill voice, Beatrice Pons was ideal as Toody’s domineering shrew of a wife. Circus veteran Al Lewis, blessed with a face that could find a contortion to accompany every passing thought, was the irascible Officer Leo Schnauser. Charlotte Rae, who stole the show with her pitch perfect comic performance in an early episode, was written in by Hiken as Schnauser’s moody, hot-tempered wife and became one of the most memorable characters on the show.

To fill out each episode, Hiken drew on a wealth of New York talent – seasoned film and TV veterans, borscht belt comedians and some of the brightest young talent from the Broadway stage. Regulars Paul Reed, Fred Gwynne and Al Lewis were on the set during the day and appearing in Broadway shows in the evening. Episodes in the first season featured show business pros Wally Cox, Jan Murray, Molly Picon, Maureen Stapleton, Jake La Motta and many more.

In this article:Comedy/Parody, Press Release, Television