“If people thought you were dying,
they gave you their full attention”
–Chuck Palahniuk

Next week, the cover of Marvel Previews will bear the headline DEATH OF SPIDER-MAN, and while the powers that be at the house that Jack Kirby built have been non-specific about what that means, they have offered the architecture of that storyline, which will be hitting newsstands and comic book shops in February. 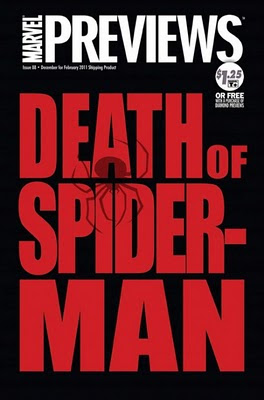 This comes almost exactly a month after Christopher Nolan announced the title of the next Batman movie would be THE DARK KNIGHT RISES, a film which the director assured neither The Riddler nor Dr. Freeze would be a part. As one hero prospers and another hero perishes, in a span of twenty-eight days, we’ve been witness to a classic example of The Tao of Superhero Fiction.The Death of Spider-Man story will be unraveling in the Marvel Ultimates universe, which isn’t exactly the same as if they just killed their flagship character.

In the Ultimates books, they’ve already killed off about 85% of their heroes and villains. They even sent Wolverine to Hell (which is kind of like sending Santa Claus through Alice’s Looking Glass, but I digress). Suffice to say that we all know that comic book heroes don’t stay dead; recent cases in point include Batman and Captain America, but it was just about 18 years ago that the world lamented the Death of Superman. And yet monthly titles for each of these characters have blossomed ever since.

The cynic in me suggests a more honest title for this new Brian Michael Bendis and Mark Millar collaboration: The Shameless Revitalization of a Character For Whom We’ve Run Out of Ideas. I confess it doesn’t have the same ring to it as The Death of Spiderman. Both writers attached are among the industry’s most talented, as were Grant Morrison and Ed Brubaker before them, and if this ruse of killing Peter Parker is handled as well as deaths of Steve Rogers and Bruce Wayne, we’ll all be in for some great storytelling. But we’re kidding ourselves something awful if we allow ourselves to believe for even a moment that this is anything more than a publicity stunt set in motion to reboot the movie franchise.

Speaking of which, I’m not sure how I feel about the title of the new Batman movie. By holding over the term “Dark Knight” from the previous film, it comes off like a direct sequel, and worse, reminds me of the last time the third film in a series addressed the second film but not the first film: Rambo III. I’m not suggesting that Christopher Nolan is a hack to be compared with the likes of Peter MacDonald, but I do feel that the title The Dark Knight Rises is more typically sequel-sounding than the previous film.

Batman Begins was a great establishing platform. Dark Knight was a darker, more engaging, crime-epic. The third film in the series should have a title that elicits an independence that the first two films enjoyed. BATMAN REBORN, perhaps? I don’t know, but this third film will likely be the last of the series for which both Nolan and Bale return, so it is likely that this third film will have a finality that will allow another filmmaker to follow, but which neatly ends the first trilogy trajectory. I hope I’m wrong, as I’d like to see Nolan stay at the helm of the Batman movie mythology, but knowing what he’s capable of producing outside of that (not the least of which evidenced by Inception), I’d consider it a sin to constrain him.

The inclusion of Inception co-star Tom Hardy so early in the planning stages has led many fans to conjecture about what role he could be playing. Hardy’s frequent on-screen persona as a tough-but-dandy ne’er do well would make him a perfect fit for Black Mask.

If so, that would be the most recent villain from the comic book continuity to appear in the Nolan film series, as he first appeared in 1985. That comic, issue #386 of Batman, was the very first issue of a Batman comic book that I bought new from a newsstand. 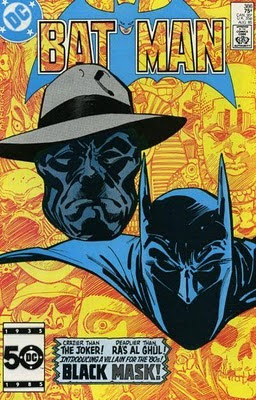 I had been previously interested only in the back issues of Batman and Detective comics, specifically the Marshall Rogers and Neil Adams tenures. But that run from Doug Moench and Tom Mandrake helped fan the flames of my excitement for Frank Miller’s groundbreaking Dark Knight Returns, which would arrive a year later.

At this point, any assumptions are far-fetched. I’ve heard that no less than six marquee starlets are under consideration for two leading roles –one a girlfriend, and one a villain. With Charlize Theron and Vera Farmiga apparently out-of-the running, that list includes Blake Lively, Natalie Portman, Keira Knightley, Naomi Watts, Anne Hathaway, and Rachel Weiss. I’m personally rooting for the two Oscar contenders: winner Rachel Weiss, and nominee Natalie Portman, but in Nolan’s hands, I’d probably trust the casting of Paris Hilton.