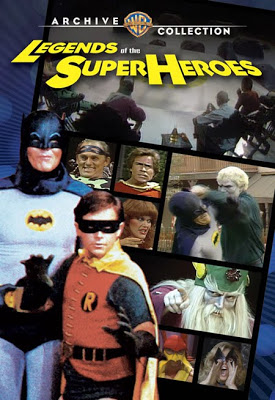 The Pitch
Heroes and villains of DC Comics square off in the two-part, live-action, made-for-TV (with a laugh track!) smackdowns of Legends of the Super Heroes. The Challenge: Batman and Robin (Adam West and Burt Ward of the live-action Batman TV series) lead The Flash, Green Lantern and more JLA members against The Riddler (Frank Gorshin reprising his TV role), Mordru, Weather Wizard and other Doom-dealers. The Legion’s ultimate gambit: trick the heroes into downing a diabolical depowering drink! The Roast: Poking fun beats swapping punches when celebrity host Ed McMahon emcees a rowdy rave-up. Who knew DC Super Heroes and villains packed as much verbal wit as physical grit when not locked in mortal combat? These Legends will leave you laughing.

The Review
I remember watching this when it first aired on television way back in 1979, and although it’s about as good as one would expect a pair of late Seventies variety specials featuring super-heroes would be, having revisited this previously unreleased moment of my childhood had me grinning from ear to ear.

Adam West, Burt Ward and Frank Gorshin all reprise their roles from the Batman series from decade before and it was the first live action depiction of a number of DC characters, which totally appealed to my eight year old palate.  The shows are not good, and in some spots, they’re pretty awful.  Alongside such heroes as The Flash, Green Lantern and Hawkman are Ghetto Man, Retired Man and Ed McMahon.

Nevertheless, this release is a must have for every DC Comics fan old enough to remember when the only opportunities to see live action superheroes on television were Linda Carter or Adam West and George Reeves repeats.  Extras include eight minutes of outtakes and deleted footage.  This release is highly recommended.

Legends of the Superheroes needs to been seen to be believed.

More importantly, it needs to be seen.