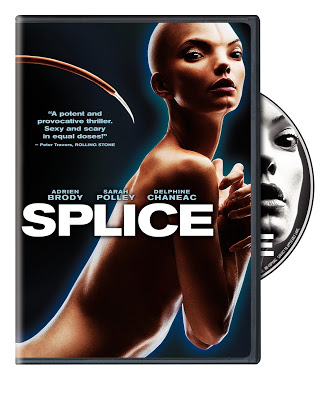 The Pitch
Superstar genetic engineers Clive (Adrien Brody) and Elsa (Sarah Polley) specialize in splicing DNA from different animals to create incredible new hybrids. Now they want to use human DNA in a hybrid that could revolutionize science and medicine. But when the pharmaceutical company that funds their research forbids it, they secretly take their experiment underground – risking their careers to push the boundaries of science and serve their own curiosity and ambition. The result is Dren, an amazing, strangely beautiful creature of uncommon intelligence and unexpected physical developments. At first, Dren exceeds their wildest dreams. But as she grows and learns at an accelerated rate, her existence threatens to become their worst nightmare.

The Review
Splice is a speculative science fiction/thriller that is a pleasant reminder that movies can be smart and fun.

Romantically involved scientists, Clive and Elsa (Brody and Polley), are bio-engineering customized genetic hybrids for a pharmaceutical corporation. When informed that the project would go on hiatus until their original experiment earns a profit, the duo secretly continues their research, splicing their hybrids to human DNA.

Of course it works and you’d be foolish to think that their experiment, “Dren”, a rapidly aging bald, kangaroo-legged, poison tailed waif is going to be a good thing for humanity.

Canadian director Vincenzo Natali, is heir apparent to David Cronenberg. With an abundant use of both practical and smartly integrated digital effects, Splice‘s cautionary tale is reminiscent of The Fly, but is distinctly it’s own story. One that I might add, logically twisted and turned without any cheap scares or gross outs, but rather a building psychological intensity that builds throughout, in no small part to it’s capable leads and French model/actress Delphine Chanéac, who is mesmerizing as Dren. Extras include a featurette.

Splice is a post-modern Prometheus tale that shouldn’t be missed.