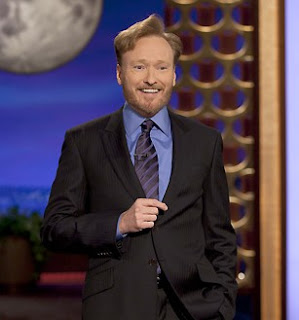 Not bad, Conan.
O’Brien used his nervous energy to bring viewers The Masturbating Bear, multiple zings at NBC, a remote-controlled moon and dueling rockabilly guitar solos with Jack White.
And the ratings? Turns out he killed.
Conan drew 4.2 million viewers and a 2.5 rating in the 18-49 demographic. That’s higher than the average that Letterman OR Leno get any given night – with Letterman drawing 3.4 million viewers, Leno getting 3.5 million viewers. The Daily Show and Colbert Report were downed by by 3 and 3.2 million viewers.
We’ll see how those ratings shake out once the new-show buzz wears off, but Conan’s big draw with younger viewers and his very strong social media presence post-Tonight Show may continue to shake up late night.
Until then, see how it all began again with a look back at the premiere’s cold open, and Conan’s semi-glorious return to (basic cable) TV.