For a decade, Josh Bernstein has been editing and publishing one of the coolest magazines ever created, Royal Flush.  A virtual party on the printed page, Royal Flush features not only everything cool, but also is ground zero for some amazing art (ummm…Paul Pope nudes, Rick Veitch Frank Zappa in the style of Kirby…smiling yet?)

The latest issue, Lucky Number Seven is in stores now and Josh took some time out of his busy schedule (let’s just say if he called in sick, newsstands wouldn’t have much to sell), to chat with FOG! about Royal Flush, Hispanic Batman and the future of digital publishing.


For those unfamiliar with it’s greatness, what is Royal Flush Magazine?

Royal Flush is the only magazine of it’s kind. All-illustrated, all-guts, all glory.

Once a year, a team of fellow-minded artists and writers gather together to create each unique issue.

We’ve been at it over ten years now!

Whether it be comic books, rock & roll culture, pro-wrestling, underground art or offensive humor, it all has a home in our dirty little pages.

What’s the magazine’s secret origin and what were you influences when creating it?

I was bit by a radioactive spider.

Okay, I actually had mono and had been bed-ridden for weeks. I started planning the first issue out of pure boredom. I never thought I would stay doing this so long.

The latest issue features (flip) cover stories on It’s Always Sunny in Philadelphia and Rob Zombie. What else is awesome in this issue?

Yes, we were very lucky to get to have both Rob and the Always Sunny cast in this issue. The highlights for me include the interviews with “Rowdy” Roddy Piper, Danny McBride, Cheech and Chong and Lisa Lampanelli.

One great piece is comic heavyweight Tim Bradstreet doing all the art for his one on one interview with Rob Halford of Judas Priest. The real treat for me as a comic book fan was to have Al Jaffee do a custom Royal Flush Fold-In, as well as having Jim Steranko interviewed by the likes of Frank Miller, Paul Pope, Chip Kidd and Dean Haspiel. We really got to do some great comic-based pieces in this issue and I think that overall, this is our most impressive collection to date.

Royal Flush is far from a disposable periodical and feels more like an art object. What is the future of a print magazine in a digital world?

Most magazines are disposable, we try to be timeless and collectible.

With that said, the digital opportunities going forward with print are very exciting. Royal Flush is about to make it’s first foray into the tablet/e-reader world with this issue and I think it’s only going to enhance what we’ve always had, which is well-written, amazingly drawn and exquisitely designed content.

Royal Flush has always been about ideas, the vessel it’s contained in doesn’t matter. Mark my words though, we will ALWAYS have a print edition.

I love the smell too much.

The magazine has also introduced a crimefighter, Hispanic Batman. Who is this mysterious hero? 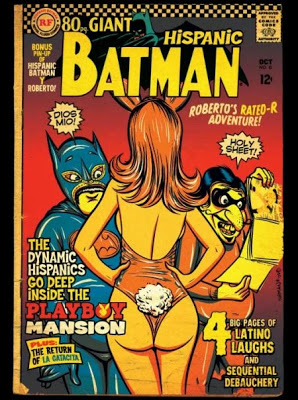 Hispanic Batman is in many ways, all of us. He is a creation of my friend and fellow Flush founder, Erik Rodriguez’s and mine. We based it off of all the crappy Batman action figures that we found in Costa Rica years ago. After that we started drawing all the famous superheroes with mustaches. That is how most of our stupid concepts start. Joking around and writing on napkins. Hispanic Batman has let us say and do some really insane things the last 13 years. 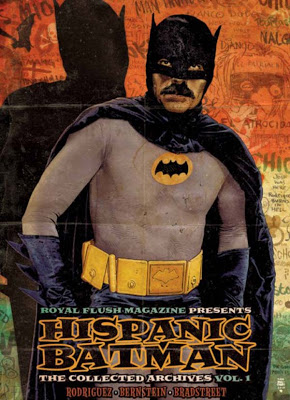 This summer we finally collected all his many had-ventures into one mighty tome and released it as an San Diego Comic Con exclusive. Tim Bradtsreet did the Adam West-inspired cover and it’s one of my favorite things ever. I can say this, Hispanic Batman has definitely brought a lot of joy into people’s lives over the past few years…

Or maybe an Alex Ross cover of Hispanic Batman

Royal Flush Magazine #7 is in stores now or at the official site, HERE!