In his book, My Best Friend Is A Wookiee, Tony Pacitti tells the heartwarming (and sometimes heartbreaking) story of what the Star Wars series has meant to him.

As someone who grew up loving Star Wars, I’ve grown to a level of indifference with occasional moments of nostalgia, where Tony is still passionately a fan of the series and it still is an important part of his life.  I have to admit a certain twinge of jealousy in regards to his enthusiasm for the universe created by George Lucas.

Tony took some time from his tour schedule (click the Facebook Fan Page for dates) to chat about Asteroid Fields, the music of Sy Snootles and looking at the sunset with Owen and Beru Lars.

I told you when we met in person that our age difference resulted in a very different social reaction. You grew up and found comfort in the saga, but felt like an outsider at times as a result, in part because Star Wars was completely off the radar. I saw Star Wars in the theatre when I was six years old and grew up with everyone loving the films. What does Star Wars mean to you?

Yeah, that’s a big difference between our generations of Star Wars fans. When I first saw Empire I was seven and it was a copy my folks had recorded off of HBO. And at that point, 1992, no one was talking about Star Wars. It was exclusively nerd fodder. So when my parents told me about how huge it was when it first came out I was really jealous. 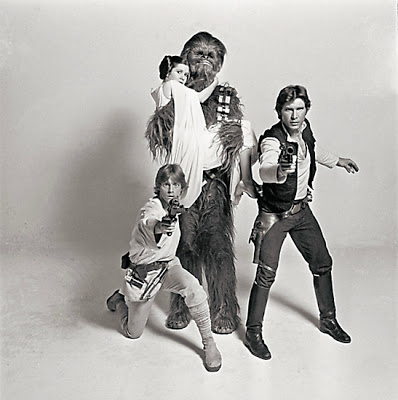 I didn’t see that until the Special Editions hit in 1997.

But Star Wars, beyond being my favorite films, will always be that thing that made me happy as a kid. It was the basis of my earliest real friendships. It will always mean hours talking about insignificant background characters and, in a pre-prequel world, what the galaxy may have been like before the Rebellion. If it wasn’t for Star Wars I probably would have had no friends in elementary school instead of the three or four it brought me together with.

In your book, you find a metaphor for many of your life experiences with the Star Wars films. Do you still equate your life the same way? 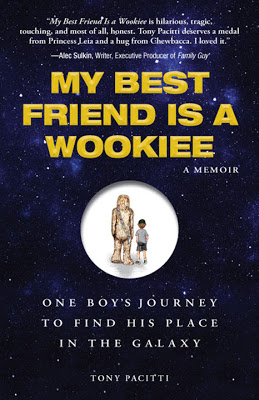 Kind of. I certainly try to live by Yoda’s teachings more than I used to–trying to avoid fear, anger and hate and all that. I’ve found that life’s a lot more fun to live when you aren’t being so cynical all the time. I’m also in a much better place now than I was though most of the book. I was very cynical and frustrated, and a lot of that was directed towards myself. That’s not the case these days. To compare it to something from Star Wars, you could say I’m in my post-Death Star II Ewok dance party days.

You expressed your dislike of the prequel trilogy. For me, it represented a passing of my childhood love for the universe. How do you feel about the prequels now?

To be honest, my jets have really cooled on the prequels. A lot of my initial reactions to the prequels had a lot to do with what was going on with my personal life at the time, which I hadn’t even really realized until I started to write the book. Like you said, I equated my life to the movies and when I first had the idea for this book I realized that each of the prequels was released at a point that lined up really well in terms of a coming of age story.

Having recently watched them I was surprised by how I felt. Episode I is still sort of drawn out and often TOO childish, but there is some spectacle in it that is undeniably fun to watch and Darth Maul and Qui-Gon Jinn are really cool characters. Much to my chagrin, however, I found myself genuinely enjoying Episode III. Again, my initial hate was very contextual to insurmountable hype and personal baggage. The chemistry between Anakin and Padme aside, I think it’s a good flick and honestly, the last shot where Owen and Beru watch the suns set with baby Luke chokes me up.

Do I like them as much as the originals?

No way. But I can watch Episodes I and III and enjoy them now that I can separate them from the memories I had them attached to. Episode II still sucks though. I feel like it could have been a text crawl at the beginning of a much less sucky movie.

Are you a fan of the special editions?

It’s tough to say no because they’re still A New Hope, Empire and Return of the Jedi. On the other hand, there are things I don’t like — Greedo shooting first, naturally, and the stupid song and dance number in Jabba’s Palace are the ones that really stick out–but what I liked in the first place is still there. 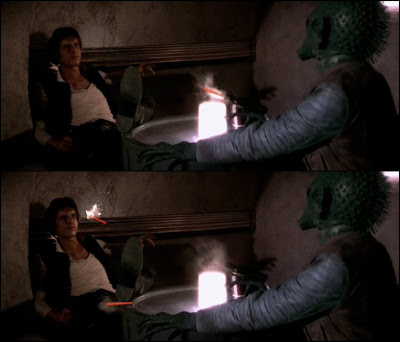 The changes are unnecessary, occasionally obnoxious, but what’s the point in putting up a stink about it. Lucas is dead set in his ways. In the meantime, I have the pre-special edition trilogy on VHS and Laserdisc if it ever starts to get under my skin like it used to.

Your first exposure to the films was watching The Empire Strikes Back on video, making your initial discovery of the saga when the Lucas universe was finite enough that there wasn’t much source material and it was pretty easy to know almost everything. Do you still follow the novels, The Clone Wars, the comics, etc?

Yes and no. I do follow The Clone Wars which, despite any of my initial expectations, is a lot of fun. It’s also, at times, brutal for what on the surface is a kids show. Characters die frequently. Not to say the violence is what appeals to me, but the word “War” is in the show’s title twice and I’m glad they didn’t tone that down. It also shows Anakin as an ace pilot and approaches his steps to the Dark Side with a bit more subtlety, which is what I wanted to see more of in the prequels.

As for the comics and books, that’d be a no.

Dark Horse has been releasing a bunch of Star Wars Omnibuses which have been great for playing catch up and I’ve been taking my time with the Star Wars: Legacy comics, but I don’t even pretend to think I can get on top of everything like I was when I was younger and there were significantly fewer books. I do find myself getting trapped on wookieepedia for a couple of hours every so often, which is like getting the Cliff’s Notes for everything.

I did read Death Troopers last year, which was the Star Wars zombie book. That was fun, certainly different. It was the first Star Wars novel I had read in maybe ten years or so. There’s a prequel to it coming out soon I think, I mat check that out.

What is your favorite Star Wars moment of all time?

It’s in The Empire Strikes Back during the asteroid scene. The whole build up is great, but from the point where Han says he’s taking the Falcon closer to one of the big asteroids to the TIEs bouncing off each other to the canyon and the Falcon doing that big, show off-y loop into the asteroid cave–that for me is just a perfect Star Wars moment. The bit of music playing over it is one of my favorites in the series and the whole scene is just a great showcase for Han, Leia, Chewie and Threepio. What a weird bunch of personalities to lump together for two-thirds of a movie and how thankful we all should be for it!

Nothing set in stone. I haven’t had any time to work on anything but I certainly have some ideas. I’m taking part in this year’s NaNoWriMo which happens every November. Basically you sign up and commit to the challenge of writing a novel in a month. The idea is to go for quantity, not quality. Whether I make the finish line or not, I’m hoping it will at least give me a chunk of something to play around with after the holidays and flesh out over the course of the coming year. I’ll probably just lose my mind though. Who knows.

Movie-wise I’m pumped for True Grit and Tron: Legacy. I don’t know when Jeff Bridges decided to buy the month of December but damned if it doesn’t look like he’s going to make it awesome. I recently watched the original True Grit and it has Coen Brothers written all over it, plus if anyone could fill the Duke’s shoes oddly enough I think the Dude could. And Tron‘s going to amazing to look at if nothing else.

In the TV world I’m a disciple of Mad Men and Breaking Bad. I try to tell everyone I can to watch both shows, particularly Breaking Bad which tends to have more successful holy shit moments than a show should be allowed to have. And of course both of those shows make me unhealthily excited for The Walking Dead.

Between AMC’s track record, the source material and Frank Darabont being behind the wheel, I’d be shocked if it isn’t great. TV’s tough for me because I don’t have cable and a while back my roommate got us busted by the cable company when he was downloading episodes of Battlestar Galactica. Not that I condone that sort of thing, it just really put the fear of God–or the fear of Cox rather–into me. There’s a lot that I know I’m missing, but I’ll just have to settle for being a year behind everyone else and getting them on DVD.

And as the king of better late than never I’m currently reading The Walking Dead and just got around to reading Gibson’s Neuromancer.

I’m an idiot for not getting into either sooner.

For more details, check out the My Best Friend Is A Wookiee Page!