The holidays are a time when many people try to get into the spirit by trying to help the less fortunate.

It is a time when it feels good to try to help others. “Helping others” is what many real life superheroes are trying to do in their own special way.

One strategy some of them opt for is to use their costumes (which they often refer to as “gimmicks”) as a way to draw attention to charitable causes they are fundraising for.

One group who is preparing to do this for the third year in a row is the Great Lakes Alliance (formerly named the Great Lakes Heroes Guild) who has an annual Christmas toy drive meeting. In years past real life superheroes from Minneapolis, Milwaukee, and even some friends from Team Justice in Florida solicited donations, used the money to buy toys and then dropped them off at charities in their three home states.

This year I’ve decided to help my local guys, The Watchman and Blackbird raise funds and toys. We had a discussion about this at my kitchen table last night before rolling on a patrol of the neighborhood in Blackbird’s car. Our plan is to find a local business willing to let the heroes set up a barrel outside for a day, and then use Facebook and other social sites to bomb the location of the heroes so people can meet them and make a donation in person. We’ll also have flyers with info on the charities and the address to where people can donate online.

The guys have gotten a wave of local press over the last month and a half- they’ve appeared in the daily paper, on blogs and podcasts, two college newspapers and a college news TV show.

They are also getting recognized more and more on the street. “You’re my hero, Watchman!” one person yelled out a car window on a recent patrol I did with him.

Another time, a doorman at a bar nodded at us solemnly and said “What up, Watchman?”

In one of my favorite stories, Watchman told me about a house full of people that ran outside when one of them saw him walking by. These people were convinced that their roommate was The Watchman so far that they searched his room and car while he wasn’t home, hoping to find his costume. The guy’s claims he wasn’t the Watchman began to ring true when the two of them were standing side by side. One of my friends also has been fingered as the man behind The Watchman mask by many, including his boss, much to my amusement. I even had to take a picture of the two of them together as photographic evidence.

Hopefully all this attention and amusement will carry over into people supporting the heroes with causes like this.

If you would like to make a donation to the hero toy drive, you can do it via Paypal at the Great Lakes Alliance homepage. 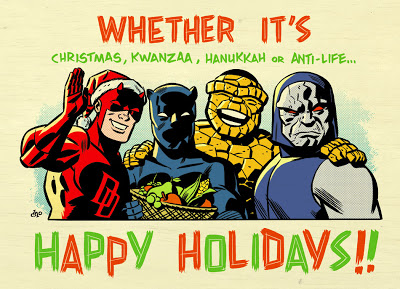