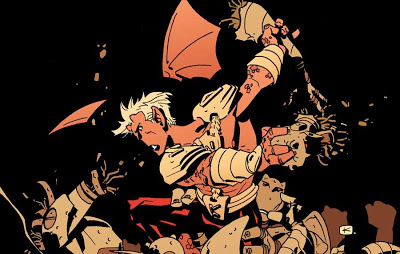 He’s part human, part dragon and all hero. Firebreather, an all-new original movie premieres on November 24 at 7/6c.
Based on the Image Comic by Phil Hester and Andy Kuhn, Firebreather also returns next week to comic shops as well.

Trailer and Image Comics Press Release after the jump. 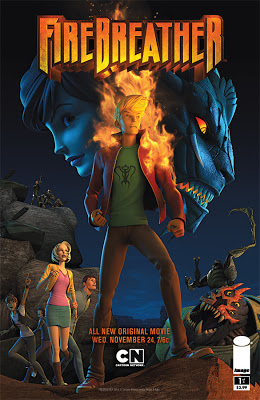 Berkeley, CA – 18 November 2010 – The FIREBREATHER movie debuts on Cartoon Network on November 24, 2010, and FIREBREATHER VOL. 3: HOLMGANG #1 is getting both a variant cover and an early release on the same day to celebrate!
Advance reviews for the movie version of the critically acclaimed Image Comics series have been stellar, and HOLMGANG #1 is a great place for new fans to jump onto the series. The variant cover features exclusive artwork from the TV movie and will be in stores November 24 alongside the regular cover.

Teenager Duncan Rosenblatt has a human mother and a giant, city-stomping, kaiju father. He also has all the worries of a normal high schooler, from bullies to girls to fitting in. Written by Phil Hester and drawn by Andy Kuhn, FIREBREATHER VOL. 3: HOLMGANG picks up where FIREBREATHER VOL. 2 left off: Duncan deals with not only losing his father but with keeping his father’s death a secret, even from his mother. But Duncan’s mysterious extended family may not let him keep that secret — or his life — much longer.

“We are super excited to have the first issue of our new Firebreather mini-series hit stores the same day the animated film debuts on Cartoon Network,” says Kuhn. “The film’s director Peter Chung really knocked it out of the park, and the Cartoon Network variant cover is a great looking piece of art that really gives you a vibe of what to expect in the movie. Please watch it, you won’t be disappointed, AND buy the comic, because it’s insanely awesome!

Hester adds, “I’m excited that people will get a glimpse of the gorgeous treatment Peter Chung and company have worked up for Duncan on this alternate cover. The 24th is a chance for fans new and old to get a double dose of classic and animated Firebreather. The best of both worlds!”