Are you there, Hammer?

Okay, enough of the formalities.

Let’s get down to business. It’s come to my attention that you, Stanley Louis Burrell aka MC Hammer aka Hammer are currently upset at Shawn Carter aka Jay-Z on Kanye West’s “I’m So Appalled.”

The Jay-Z lines in question were:

Like all rappers, you are not above any slights (either real or perceived).

Everyone from LL Cool J to 3rd Bass to D.O.C. to A Tribe Called Quest took shots at you and your pop-rap/dance-focused styles. Despite the disses, no one can say you weren’t an innovator the way you brought your pop-soaked rap to the masses through MTV with “U Can’t Touch This.”

However, we can point to the fact that you did go bankrupt. Also on Nelly’s “Country Grammar,” he does say “blow 30 mill like I’m Hammer.” Hammer…that song was a pretty big hit, so you can’t act like you never heard it before and didn’t recognize that your name is synonymous with the amount $30 million dollars.

Another point is that you appeared in a commercial for Cash4Gold last year that aired during the Super Bowl. 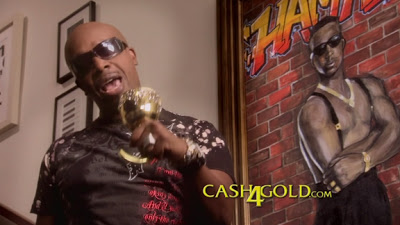 Let’s look at your career.

While Jay-Z has had a stellar career, it’s not like he hasn’t made some mistakes. (La Roc Familia, his tenure at Def Jam, the albums Kingdom Come and Blueprint 3 to name a few.) Still in a side by side comparison, Jay-Z comes out on top. Over a decade of success against Hammer’s 3 years. (I might be being generous with that number.)

I’ve said all that to say this, “Better Run Run” is one of the worst disses ever by someone not named Benzino.

The video starts off with King Hammer as he’s credited, getting a call in the middle of a business meeting to find out that Jay-Z has dissed him. (Really, Hammer? King? I mean you sold some records, did some dances but calling yourself King seems to be an overstatement. Maybe King of Dancing. Actually, I think Big Daddy Kane and Kid or Play would argue they were better dancers in their primes.) This is followed by a scene of a man in a Yankees cap being pursued by some sort of devil. Aside from the cap and being black, he bears no resemblance to Jay-Z. None. Hammer then goes on to say Jay-Z made a deal with the devil for his success.

Meanwhile, the beat sounds like something Lil Jon threw out in 2004. More dancing by King Hammer. Glad to see nothing changes. Hammer by a fire. Hammer hitting the pads. (Sidebar: This was really poorly thought out. Jay-Z is one of the top 5 MCs living or dead. Hammer was never a lyricist but more of a showman. Maybe rap’s version of KISS. All style, no substance. No one will ever dissect his lyrics and be blown away…unless it’s by the mediocrity.) Hammer just used the word “swag.”

This is horrible. Hammer was always good, never great. This video just reminded the world of that fact.

In this article:Hip-Hop/Rap, Nostalgia, Written by Jay Williams