What’s brand new, 4” tall, limited to just five, with one of those being a 1/1 ‘Handy Rampart’ chase?

I’ll give you a clue… each one is hand-cast and painted by Cris Rose himself.

Introducing ‘Rampart Edition C’, the 3rd edition of the stackable emergency services robot wall, sporting a brand new head and a new reassuring quote to boot. Editions A and B sported the classic ‘Keep Calm and Carry On’; Edition C sports the more stoic ‘Today is a Good Day To Die’… probably why the little guy looks so worried! Edition C is painted to match the hugely popular Sprogs Edition A, perfectly autumnal. 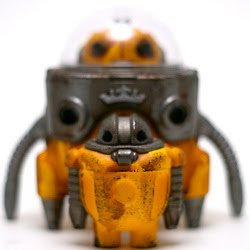 Cris reminds us of the original Rampart backstory: –

‘A robotic assistant to the police and emergency services, primarily within Urban and Suburban areas. Strategically placed around the city for maximum coverage, each ‘bot has his own little alcove to stand in until required. When called to action, all Ramparts in a given area will fire up their four primary thrusters and hover out of their little homes towards the incident. 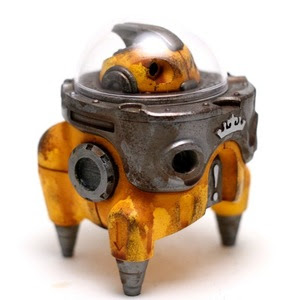 ‘They will then proceed to encircle the accident/fire/disturbance, locking together and stacking on top of each other to form a seven-foot high wall of metal to keep the general public safe. Outfitted with sirens, loudspeakers for public announcements, cameras and fire extinguishers, Ramparts assist with the coordination of rescue efforts in a mostly passive manner. They can, however, be asked to gently shepherd crowds, put out small isolated fires (such as in the engine of a poorly maintained hovercar) or ram through debris blocking firefighters.

‘Modeled loosely on the ‘British Bulldog’, wearing a giant armoured collar and displaying helpful phrases such as ‘Keep Calm and Carry On’ and ‘Today is a Good Day to Die’, Ramparts quickly gained popularity on the streets and a variety of friendly nicknames arose, such as ‘Bullbots’, ‘Hoverdogs’ and ‘Flying Gits’… 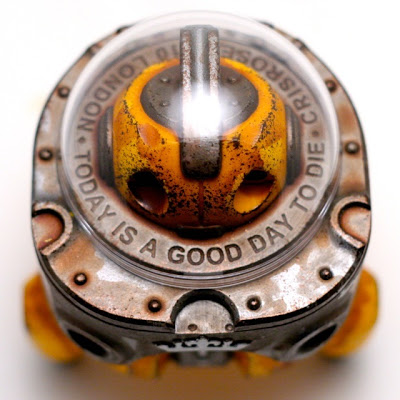 ‘There is a lesser-spotted ‘Handy Rampart’ that has arms. They don’t normally need them and can eject them if they need to become part of a wall, but sometimes it’s useful to have one or two at the scene that are able to pick up debris or carry an old lady’s shopping.

‘Rampart’s programming was only possible due to the research and development of the Epoch Foundation. Their studies on packs of Rumbles in the ‘wild’ had given the robot designers back at the factory a massive boost in the field of Networked Intelligence. Whereas Rumble packs were limited to 5 or 10 units, packs of Ramparts initially started at 20-40 but quickly evolved by themselves to incorporate as many as 600. 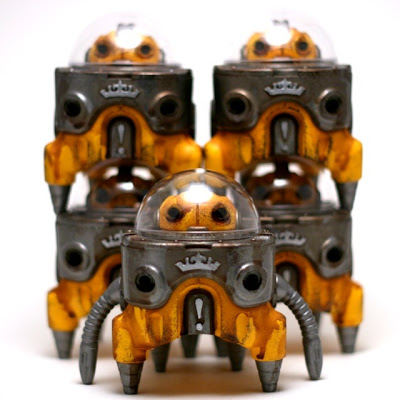 ‘Though each ‘bot possessed only half the individual intelligence of a Rumble unit, their combined hive-like intelligence became a near omnipresent guardian over their area of the city. Their reaction time in an emergency was so quick, their analysis so accurate, they’d soon learnt to predict incidents and help avoid them. They would request people leave shops before the fire alarms had even gone off – they would form walls in roads seconds before the hovertruck’s brakes failed – they’d be waiting to encircle the mugger as he ran around the corner.

There was no doubt, they are super-smart as a team!’

To find out more about Cris Rose’s Rampant series and other goodies, try his store here!