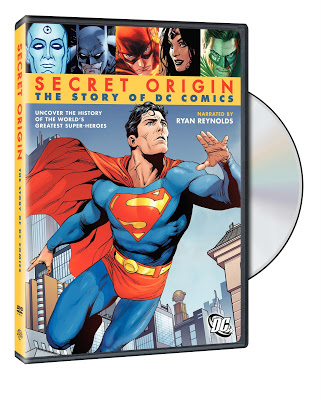 The Pitch
An expansive documentary exploring the 75 years of DC Comics, the memorable characters of its universe and the talented artists and writers who brought them to life.


The Review
It’s pretty hard to be completely honest in a documentary produced by the subject, and as a result, this doesn’t feel much more than a promo piece.

The first issue is it’s length.  It’s hard to encapsulate seventy five years worth of history in ninety minutes, especially when it’s easy to imagine a several hour piece.  The other problem is that although a significant number of players are shown as talking heads, most are given too brief screen time and little context to who they are.  Ryan Reynolds narrates, stringing together the majority of the interviews (Gerard Jones, writer and comics historian delivers the bulk of the information).

Secret Origins: The Story of DC Comics is entertaining, but not particularly informative enough for a die hard comics fan, but might spark the curiosity of the uneducated.  A mild recommendation for most audiences, but for a young or curious comic fan, it’s worth seeing.