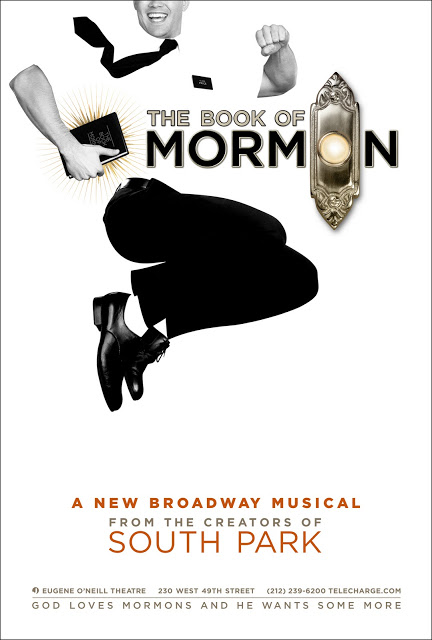 Trey Parker and Matt Stone have written a Broadway musical about a pair of mismatched Mormon boys sent on a mission to a place that’s about as far from Salt Lake City as you can get.

Initial casting has been announced for THE BOOK OF MORMON, the first Broadway musical from the creators of “South Park”.  The production opens on Broadway on Thursday, March 24, 2011 at the Eugene O’Neill Theatre (230 West 49th Street).  Previews begin on February 24, 2011.
Tickets are now on sale at www.bookofmormonbroadway.com.

Parker and Stone make their Broadway musical writing debut with THE BOOK OF MORMON.  Parker and Stone have won four Emmy Awards and a Peabody Award for “South Park,” the team’s controversial, critically acclaimed series, which airs on Comedy Central.   “South Park” recently aired its 200th episode and begins its 15th season in April, 2011.

Parker co-wrote the musical numbers for South Park: Bigger, Longer and Uncut.  The film’s accomplished and outrageous score surprised and delighted critics and audiences.  Parker shared an Academy Award nomination for Best Song for the music and lyrics for “Blame Canada” from the film’s score.  The New York Film Critics Circle also honored South Park: Bigger, Longer and Uncut with the organization’s first award ever presented for Best Animated Film.

Robert Lopez is co-creator, composer and lyricist for Avenue Q, which won 2004 Tony Awards for Best Musical, Best Score and received a Grammy nomination for its Original Cast Album.   Avenue Q played for six years on Broadway and is currently running Off-Broadway.  With wife Kristen Anderson-Lopez, he wrote Finding Nemo: The Musical (playing Orlando since 2006), the Broadway-bound original musical Up Here (La Jolla Playhouse, 2011) and songs for Winnie The Pooh (Disney Feature Animation, 2011).  He shared two Emmy Awards for his music for “The Wonder Pets,” and an Emmy nomination for the “Scrubs” musical episode.

Performance schedule:
Beginning February 24
Monday through Saturday at 8:00 PM, with matinee on Saturday at 2:00 PM.