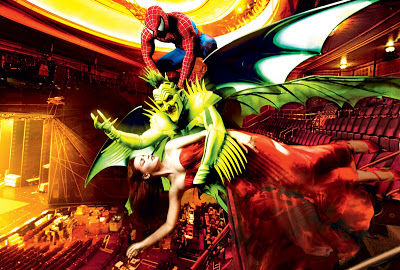 One week from today, Spider-Man Turn Off The Dark swings onto Broadway and SyFy decided to team-up with the webslinger just in the nick of time.

SYFY PARTNERS WITH “SPIDER-MAN TURN OFF THE DARK” TO BE KEY MEDIA PARTNER
NEW YORK – November 11, 2010 – Syfy, the premier cable entertainment destination for imagination-based entertainment, announced today it would be a lead media partner for SPIDER-MAN Turn Off The Dark, the highly anticipated Broadway show that joins the theatrical and cinematic vision of Julie Taymor with the thrilling musicality of Bono and The Edge, and the iconic Spider-Man brand.
The collaborative partnership allows the brands to join forces to leverage the super-powered consumer bases each reaches.  Elements of the partnership include sweepstakes, special promotions, regional affiliate partnerships and prominent media exposure.
“Syfy is thrilled to partner with such an incredibly talented team of luminaries to bring to life the iconic Spider-Man franchise as a spectacular and ground-breaking production for a whole new Broadway audience,” said Dave Howe, president of Syfy.  “Last year Syfy was a proud sponsor of the Tim Burton exhibit at the Museum of Modern Art, and this year we’re honored to lend our support to this ambitious landmark theatrical vision.”
SPIDER-MAN Turn Off The Dark will begin performances at Broadway’s Foxwoods Theatre (213 West 42 Street) on Sunday, November 28, with Opening Night set for Tuesday, January 11.  Tickets are now on sale at the box office and via Ticketmaster.com / (877) 250-2929.
SPIDER-MAN Turn Off The Dark represents the consummate collaboration of cultures by joining the theatrical and cinematic vision of Julie Taymor with the thrilling musicality of Bono and The Edge, and the iconic Spider-Man brand. This project has allowed these artists to create a work specifically designed for a theater environment, one that can‘t be produced as a stadium show, and is the natural evolution of three remarkable careers. SPIDER-MAN Turn Off The Dark promises to be the most ambitious production ever undertaken on Broadway.
Featuring music and lyrics by 22-time Grammy® Award-winners Bono and The Edge of U2, direction by Tony® Award-winner Julie Taymor (The Tempest, Across The Universe, The Lion King), a book co-written by Taymor and Glen Berger (Underneath The Lintel) and one of the most iconic title characters of all time, SPIDER-MAN Turn Off The Dark finds astonishingly fresh ways to tell a story inspired by over forty years of Marvel comic books. The show follows the story of teenager Peter Parker, whose unremarkable life is turned upside-down, literally, when he’s bitten by a genetically altered spider and wakes up the next morning clinging to his bedroom ceiling. This bullied science-geek suddenly endowed with incredible powers soon learns, however, that with great power comes great responsibility as villains put both his physical strength and strength of character to the test, and being with the girl next door, Mary Jane, may prove to be the greatest responsibility of all. Forget everything you think you know about Broadway; SPIDER-MAN Turn Off The Dark will hurtle the audience through a thrilling experience in ways never-before-dreamed-possible in live theater.
Syfy is a media destination for imagination-based entertainment. With year round acclaimed original series, events, blockbuster movies, classic science fiction and fantasy programming, a dynamic Web site (www.Syfy.com), and a portfolio of adjacent business (Syfy Ventures), Syfy is a passport to limitless possibilities. Originally launched in 1992 as SCI FI Channel, and currently in more than 98 million homes, Syfy is a network of NBC Universal, one of the world’s leading media and entertainment companies. (Syfy. Imagine greater.)