I’ve been noticing an interesting trend of late. At a time when the movie-going public couldn’t be any more infatuated with zombies and angst-ridden vampires, a more surprising genre seems to be making a revival comeback.

If I’m not mistaken, Hollywood is attempting to revive the Western.

Mr. Hollywood (aka Steven Spielberg, duh) is at the heart of it, credited as executive producer on two upcoming Westerns, TRUE GRIT and COWBOYS & ALIENS.

TRUE GRIT is a new film adaptation of the classic novel, written and directed by the impossibly talented Coen brothers who recently established their Western credentials with my favorite movie of the past decade, NO COUNTRY FOR OLD MEN. 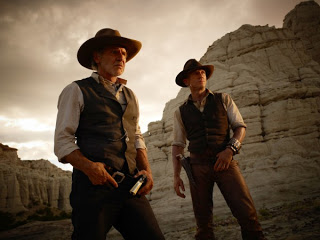 Meanwhile, for a less traditional take on Westerns, look no farther than Jon Favreau’s upcoming COWBOYS & ALIENS which hopes to finally overcome the curse that seems to plague most Western/scifi hybrids like Will Smith’s WILD WILD WEST (which I’ll be the first to admit is a guilty pleasure of mine). Hopefully, what is essentially a team up between Indiana Jones (Harrison Ford’s back in hat, with revolver) and James Bond (Daniel Craig’s alien bracelet is basically a bad ass Q-gadget), is as hard to screw up as it sounds.

In preparation for the impending cattle stampede, I’ve taken the liberty of picking four recent Westerns and judged them for you accordingly. Because you know how much I enjoy judging films. 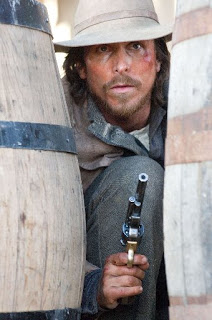 It may not be your father’s Western, but it’s a Western nonetheless.

3:10 TO YUMA is perfect to start with because it embodies one of the major differences between the traditional Western and the modern Western: pacing. Westerns, like the cowboy, are often more measured than your typical action genre, unfolding more deliberately and less frantically. YUMA takes the Western into modern action-film territory with state-of-the-art action sequences and a more furious pace.

Yet, it still maintains the ideas that make a Western a Western. It has outlaws, gunfights, and robberies. At the center, a poor rancher (Christian Bale) joins a posse tasked with transporting a notorious bandit (Russell Crowe) in exchange for the much-needed reward. All the while they are hunted by the bandit’s gang led by Ben Foster in what may be his finest, yet most disturbing performance. All the truly important genre staples are there, from the visuals to the moral underpinnings, only with modern packaging.

THE GOOD, THE BAD, AND THE WEIRD 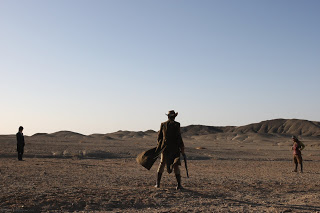 They just don’t make them like this anymore. Not in America, anyway.

But in 2008 in Korea, this is exactly how they made them.

The time: the 1930s (just like classic JONES). The place: the deserts of Manchuria, which doesn’t look too unlike the Old West (or Egypt where Indy did a lot of his adventurin’). The premise is simple (in a very INDIANA JONES, maguffin kind of way): Three men, the Good (a bounty hunter), the Bad (a bandit and hitman), and The Weird (a thief), compete for the same treasure map.

WEIRD offers a fun mix of Western-style gunplay and martial arts (much in the same way the COWBOYS & ALIENS trailer mashes Western gunplay with brutal Jason Bourne/Craig’s Bond style action). This movie has some of the best actions scenes I have seen since the ‘90s, relying on ridiculous stunt work in favor of the American “CGI-the-fuck-out-of-it” approach. As a result, the action scenes play like something out of RAIDERS OF THE LOST ARK or THE LAST CRUSADE. In one impressive set piece, entire armies chase the map, riding everything from horses to jeeps, getting blown apart by artillery fire as they blast each other with shotguns. Along with the INDINANA JONES-style moments come Western cornerstones, including an amazing shootout. 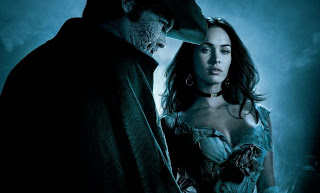 It’s a shame Westerns and science fiction haven’t traditionally mixed as well as Westerns and martial arts do in WEIRD. As good as the trailer looks, COWBOYS & ALIENS has to overcome the bad taste left in audience’s mouths by the previous Western/science fiction hybrids. Though I’ve never seen FIREFLY, every other hybrid I can think of left something to be desired, from BACK TO THE FUTURE: PART III to BLOODRAYNE: DELIVERANCE (which is literally the worst movie I have ever seen).

JONAH HEX is no exception. Just this week, Favreau told MTV, “if you’re doing a mashup of two genres, like science-fiction and a Western, if you play one of them tongue-in-check, the combo’s not what’s going to be special.” Movies like WILD WILD WEST and JONAH HEX make a mockery of the Western, really only borrowing the setting and the time period from the genre, tossing everything else to the wayside. JONAH HEX suffers from a poorly written script with a major identity crisis. It tries to be a Western and superhero movie with both science fiction and mystical elements, becoming a jumbled mess instead.

NO COUNTRY FOR OLD MEN 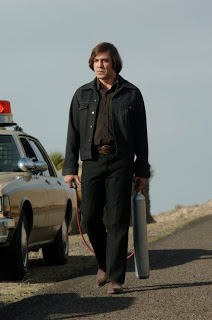 My favorite contemporary Western. Also my favorite Coen brothers’ movie. The same Coen brothers who I consider among the top five most talented filmmakers working today. Needless to say, I love this film. (Go ahead, guess if I consider it a hit or a miss! I dare you.)

Though NO COUNTRY is not set in the traditional Western time period (hence, “contemporary Western”), it is every bit a Western.

Tommy Lee Jones’ Sheriff Bell perfectly embodies the old, lone cowboy on a quest as he slowly and meticulously tracks Llewelyn (Josh Brolin) after Llewelyn finds a fortune in lost drug money. Javier Bardem earns his Oscar (and then some) with his turn as the terrifying Anton Chigurh, the most unforgettable villain since Darth Vader or Hans Gruber.

All this set against the backdrop of the gorgeous American West in 1980, a place every bit as sleepy as the one-horse towns of the 19th Century. I’ve never seen a film that better captures the look, feel, tone and pace of a Western without being a straight Western in the traditional sense.

In this article:Movies/DVD, Written by Nick Doll