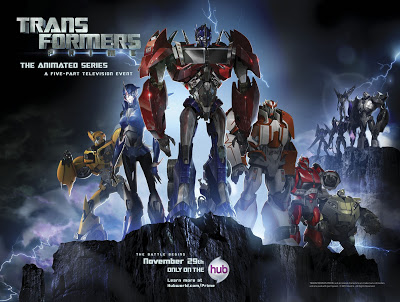 After much anticipation, The Hub is launching it’s new Transformers series, Transformers:Prime as a five-part television event.

Full press release and trailer after the jump.

LOS ANGELES, Ca. – Fans of the enormously popular Transformers action-adventure entertainment franchise will revel in the upcoming television event on The Hub cable network – a five-part original mini-series, Monday-Friday, November 29 – December 3, showcasing “Transformers: Prime,” a new CGI-animated television series coming to the network. The Hub, a TV network for kids and their families, is a joint venture of Discovery Communications and Hasbro, Inc., and is available to 60 million U.S. cable and satellite households.

Prior to the five-day mini-series event, The Hub will spotlight “Transformers: Prime” with a Thanksgiving holiday weekend sneak preview of the mini-series and an action-packed lineup of “Transformers: Prime”-related programming that begins Friday, November 26. Kicking off the Transformers schedule is a special episode of the original series “Hubworld,” a weekly, half-hour, pop culture magazine that will be dedicated to the Transformers phenomenon, Friday, November 26 (3 p.m. ET).

“Hubworld”’s special “Transformers: Prime” episode will be followed by a half-hour behind-the-special, “Hub Exclusive: “Transformers: Prime’” (3:30 p.m. ET), which culminates with the premiere of the first two half-hour episodes (at 4 p.m. and 4:30 p.m. ET) of the “Transformers: Prime” mini-series, in which arch rivals the Autobots and Decepticons once again face-off in their epic rivalry for control of Earth. The all-new mini-series will feature iconic characters of the franchise, including Autobots Optimus Prime and Bumblebee, and the ominous Decepticon Megatron, as well as introducing new human characters to the action series.

A full schedule of the “Transformers: Prime” and related programming follows. (All times ET).

About The Hub:
The Hub is a multi-platform joint venture between Discovery Communications (NASDAQ: DISCA, DISCB, DISCK) and Hasbro, Inc., (NYSE: HAS) with a goal of entertaining, enlightening, empowering and educating children and their families. The cable and satellite television network features original programming as well as content from Discovery’s library of award-winning children’s educational programming; from Hasbro’s rich portfolio of entertainment and educational properties built during the past 90 years; and from leading third-party producers worldwide. The Hub lineup includes animated and live-action series, specials and game shows, and the network extends its content through a robust and engaging online presence, https://www.hubworld.com