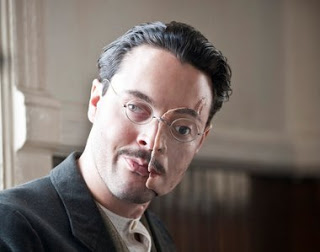 Get ready to see a lot more of breakout character Richard Harrow (Jack Huston). HBO is promoting the character to regular status, Deadline reports. Harrow has brought creepy humor to Empire as Jimmy Darmody’s war-torn vet with half his face covered by a painted piece of tin.
And Huston brings a bit of extra history to the period drama. He is the grandson of film director Jack Huston and nephew of actress Anjelica Huston.
Good move by HBO. You have to keep around a character who’s introduced on Halloween in a scene like this: