Can’t A Grown Man Read Comics doesn’t want you to disappoint your respective fan-boo or comic book obsessed cousin with piss-poor gift decisions at the zero hour. In an effort to write as little as possible (I have my own last minute shopping to do, y’know) and as an act of good will (’tis the season) I present to you a list of ten items you can easily grab from the internet before Christmas Day.

This is the first ever “C.A.G.M.R.C. Holiday Gift Guide for Procrastinators Who Don’t Know $#!+ About Comics!” (Don’t worry, I’ll keep it simple.)

10) A Subscription to Clint Magazine
Mark Millar (creator of Wanted and Kick-Ass — you remember those movies, right?) started his own magazine that is filled with short comics by him and his equally sarcastic friends. At £41.50, the currency exchange on this subscription can be pretty daunting for an American buyer, but the magazine features new articles and comics every month (okay, with a few reprints of Millar’s Kick-Ass 2 and Nemesis) which pretty much guarantees that he/she won’t have most of the stories in this monthly fix.
Do Not Get: The Kick-Ass hardcover or the Kick-Ass movie. They probably already have it. 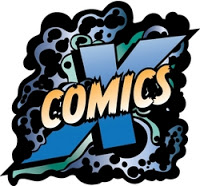 9) A Gift Card for Comixology
Old school nerds may moan about the advent of the digital comic, but let’s face it…those people are going to die under their own stench anyDAMNway. Bring your nerdling into the 21st century with Comixology’s growing catalog of digital comic books specifically for the iPhone, iTouch, or iPad. It’s pretty simple. Get them an iTunes gift card (available pretty much anywhere) and point them to Comixology.com
Do Not Get: Floppies. That is, 30-page comic books that come out on a monthly basis. So much can easily go wrong that way… 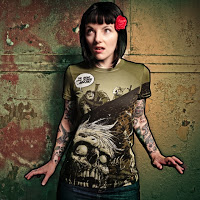 8) Every Night I Have the Same Dream, Issue 2, Vol. 1 T-Shirt
For the Zombie comic fan who has everything Walking Dead, this is a nice alternative. Threadless.com is selling this shirt for $12.00! Rip the price tag off, act like it cost a pretty penny, and try to come up with a reason why you can’t make it to their Walking Dead season 2 premiere party.
Do Not Get: The Walking Dead anything else. If they are still fans after that questionable final episode, then they probably have every type of Walking Dead merchandise imaginable. 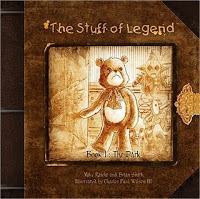 7) Stuff of Legend Book One: The Dark
With beautiful art that looks like it was hand-carved, Stuff of Legend tells the story of a group of toys that walk into the nightmare world of the “boogey man” in order to rescue their owner. With a price range of $10-$13 on Amazon, a Free Comic Book Day debut issue that is virtually impossible to find (at least for a reasonable price) and rumors of a movie option, Stuff of Legend is a sleeper hit that is just going to get bigger. Get that fantasy comic geek this title before it becomes the next Scott Pilgrim (Oh…I forgot that normal people don’t know what that is)!
Do Not Get: Fables. As I pointed out earlier, if they are into fantasy titles then they probably already have the Fables series, and in my experience not nearly enough people know about Stuff. 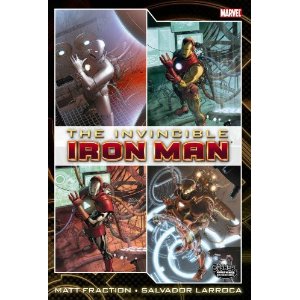 6) The Invincible Iron Man Omnibus Vol 1
Matt Fraction and Salvador Larroca make Iron Man the most important cat in the Marvel Universe…and then they break him down to rebuild him again. This is the summer movie that Iron Man 2 was supposed to be…
Do Not Get: Iron Man 2. The lazy third act will just create more anguish for them than Christmas joy.

5) Absolute Planetary Vol 2
It seems like it took Warren Ellis and John Cassaday forever to reach the end of this genre-bending archaeologist superhero tale, but the wait was worth it. This second over-sized hardcover is ideal for the superhero geek who has exhausted every facet of the usual superhero fare. It has plenty of familiar concepts from both DC and Marvel, but they have been knocked on their ass in the name of unpredictable fun!

Do Not Get: Absolute Planetary Vol. 1. Don’t get me wrong…it’s a great book, but that damned thing cost too much since it was out of print for so long. Get them Vol. 2 for Christmas, act like you didn’t realize it was the second volume, and make that geek buy it for himself. Trust me, we can’t stand having an incomplete story in our collection. 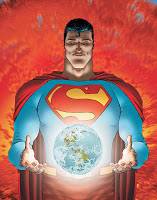 4) Absolute All-Star Superman
You know Superman, right? Of course you do! Well, this book is about how he dies! (No, this isn’t that “Doomsday” thing you heard about in the 90s — just shut up and pay attention!) If the nerd you’re buying for is a DC Comics fan then this is sure fire. With so much critical acclaim already on it’s back, chances are the receiver of this gift may have already ponied up for the normal softcover edition of this book or even picked it up when it came out initially, but this “Absolute” (which means it is an over-sized hardcover) has made everyone’s Holiday Gift Guide. Blair Butler, Stephen Blitz, and Elizabeth Weitz  like it (just know that they are trusted sources) and so will the person you’ve picked this up for.
Do Not Get: Superman: Earth One. 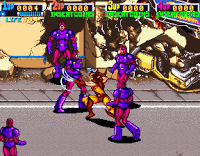 3) X-Men: The Arcade Game for X-Box 360 and PlayStation 3
This one is a bit complicated. Okay, so there is this thing called “Microsoft Points.” You use them to buy things for your X-Box. Then there is this thing called X-Men: The Arcade Game (yeeeeeah…that thing with Hugh Jackman and Halle Berry). It was a video game that just about any child from the 1990s has probably played. It was stupid and awesome at the same time. Now — and you’re going to have to trust me on this — you can’t just go to the local Gamestop and pick up X-Men: The Arcade (it is only available online), but you can go to Amazon and buy a Microsoft gift card that is worth 1600 points and give that to your fanboy/girl as a gift. On the flip side, if the person you are purchasing for has a Playstation 3 and not an X-Box 360, you can buy a PlayStation 3 gift card on Amazon for $20.00 too. Just give the gift card to your fanboy/girl and tell them that it’s for X-Men: The Arcade Game. They might be impressed…
Do Not Get: A PlayStation Move or an X-Box Kinect. People who are serious about their video games do not want to jump around like an @$$hole in their living room with a wand. 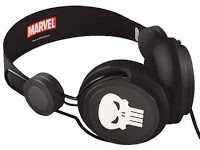 2) Coloud Marvel Headphones (Punisher)
Show the person you’re shopping for that you support their geeky-ness, but you don’t want them to look like a dork in public by getting them these Punisher headphones. The Punisher symbol on the ear piece beats out the embarrassingly nerdy X-Men and Iron Man options from Coloud. This way, they can appear brooding and alternative, but in actuality they are just a big ol’ dork!
Do Not Get: The Hulk, X-Men, Captain America or Iron Man versions of these headphones. Geek is chic, but it doesn’t have to be gaudy. 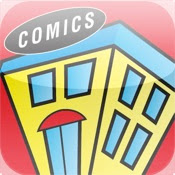 Let’s face it…even in a crappy economy, comic book nerds can be gluttonous when it comes to merch. There is a “I want that first” mentality that has plagued (and imploded) the comic book industry and it shows no signs of stopping. For that reason, your safest bet is to let them sort out what they want for Christmas. So why don’t you just strap on an oxygen mask, brave the sarcastic underbelly that is the local comic book store, and just get them a gift card. I guarantee you that they will spend it all by Wednesday, December 29th.
Do Not Get: Anything on this list.