NOTE: New comics were pushed back to Thursday this week, so instead of reviewing something recent I’m going to gush over something a bit old. 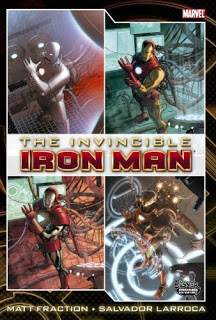 After being endlessly bumped around from X-Title to X-Title for the bulk of his Marvel career, artist Salvador Larroca has once again landed a non-mutant book: “The Invincible Iron Man”. Finally, the first 19 of his 35 issue run (and counting) has been collected in “The Invincible Iron Man Omnibus Volume One.” Yes, it costs a pretty penny to see his work in an oversized hardcover…but one look at his Euro-Anime style and you’ll understand why it’s worth it.

However, great artwork alone makes great Deviant Art profiles, not great comic books. Fortunately, Larroca is being guided by writer Matt Fraction (“Casanova” and “The Immortal Iron Fist”). Together they spin a hell of a superhero/spy-fi adventure and create two of the most lively story arcs in Iron Man history. 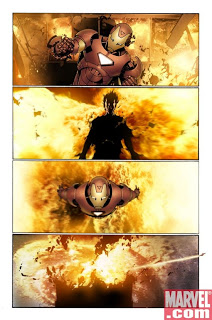 First up is “The Five Nightmares,” which pits Tony Stark/Iron Man against Ezekiel Stain (son of arch nemesis Obidiah Stain). Still reeling from the ethical uncertainty of “Civil War,” Stark finds himself appointed head of the peace-keeping task force S.H.I.E.L.D. This makes him a massive target for Ezekiel whose rationale behind coming after Tony is partly revenge but mostly pissing contest.

Fraction is resistant to telling a simple revenge-for-my-father’s-death story, instead he characterizes as many of Stark’s supporting cast as a sort of distraction from the standard plot points (although he uses tons of captions as a result). Maria Hill (Stark’s no. 2) and Pepper Potts (his gal Friday) get particular attention from the writer as they are both elevated from plot devices to testicle-stomping “Bond girls.” 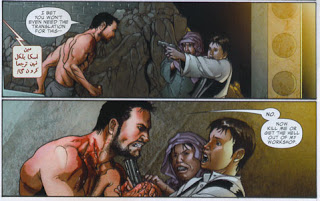 The second arc in this 344-paged beauty is “World’s Most Wanted,” a somewhat protracted “Secret Invasion” tie-in, in which Stark has an off-panel fall from grace and is replaced by Norman Osborn as director of S.H.I.E.L.D. Osborn’s lunacy while at the top of the Marvel U. was one of the few joys of all these endless crossover events and Fraction utilizes that to maximum effect. Osborn ups the ante against Tony while Stark devolves in an effort to protect his most prized possession…his brilliant mind. 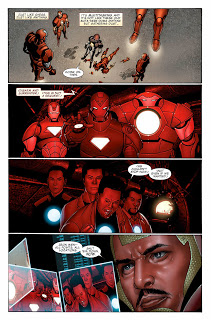 Certainly, there are cheaper softcovers available (albeit, broken down over three volumes) for “Invincible Iron Man,” but a story this expansive and attractive benefits from the larger format. Fraction and Larroca create a summer blockbuster that easily outshines even Jon Favreau’s efforts. Fraction’s Tony Stark is every bit as cocksure as his movie counterpart is, but there is a severity to his character that is wonderfully supported by little nods at continuity. Together, as artist and writer, they display a blatant enthusiasm for science fact amongst a playful amount of science bull shit. This is where Larroca comes in strongest, by giving the reader plenty of technological bells and whistles in each panel. It’s a team effort that has the potential for an amazing run and that will hopefully live up to its adjective.